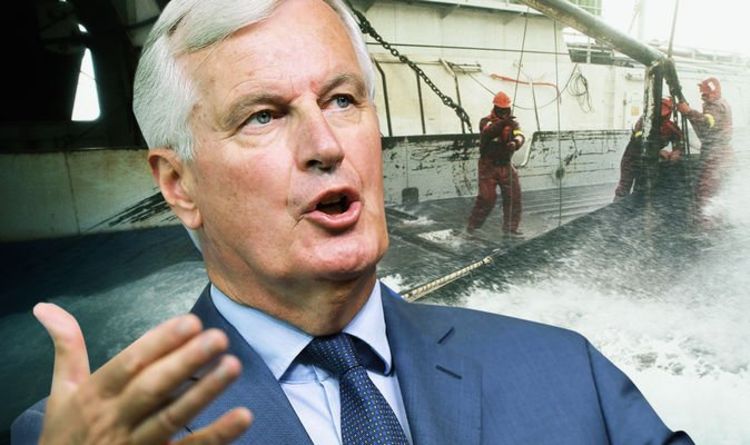 Michel Barnier, the EU’s chief Brexit negotiator, has struggled to garner the attention of European capitals during the coronavirus pandemic as he tries to water down the mandate handed to him by leaders before the crisis started. His British counterpart, David Frost, Boris Johnson’s lead negotiator, has told Brussels he will not accept the current plans, which Downing Street believes is an attempt to continue on the basis of the hated Common Fisheries Policy. A new diplomatic effort, which could even see Mr Frost defy the coronavirus pandemic and travel to Brussels for the first face-to-face talks for more than two months, to reinvigorate the faltering post-Brexit negotiations is expected to get underway next month.

Brussels could even move away from its hardline fisheries as part of the effort to secure a deal after the Prime Minister was briefed talks could soon collapse if the EU doesn’t agree to compromise on its red lines.

“We should probably get more realistic about our fishing position,” a senior diplomatic source told The Times.

“These are the things that have to be decided at a much higher level than Frost or Barnier.

“The Pandemic is destroying everything in the sense that everybody’s mind is focused on something totally different to Brexit, which is the recovery in the exit strategy.”

The EU-wide economy is facing its worst recession in 90 years.

Mr Frost will make a series of draft legal texts – including plans on fisheries and a regulatory level playing field – to member states in the hope of breaking the deadlock.

UK officials close to the negotiations are understood be have been made aware of the problems Mr Barnier is having getting the attention he needs during the COVID-19 outbreak.

A source said: “Mr Barnier must know that his mandate is non-negotiable in at least some important areas, but he’s doing his best with it.”

The third round of trade talks last week ended in acrimony, as the two sides conceded very little progress was made.

Mr Frost has briefed the Prime Minister that unless the EU ends its fundamental demands, talks could end in no deal.

Britain’s chief trade negotiator with the EU has warned that his counterpart Mr Barnier has reverted to the same tactics used to ensnare Theresa May.

Mr Frost briefed the Cabinet that talks could end with no deal because the EU’s chief Brexit negotiator continues to insist Brussels’ demands must be resolved before serious progress can be made.

MUST READ: Gove hits out at Barnier’s fishing demands amid Brexit deadlock

He told ministers the Frenchman is “losing the argument” but has little room for manoeuvre because of his reluctance to ask European capitals to change his negotiating mandate.

Previously Mr Barnier convinced Mrs May that progress could only be made if she accepted the controversial Irish border backstop and multi-billion-pound Brexit divorce bill in the final deal.

British negotiators believe Mr Barnier is now desperately “reaching for the old script” and demanding access to Britain’s fishing waters, a regulatory level-playing field and a role for the EU judges in overseeing the country’s standards before allowing talks to move forward.

Relations hit rock-bottom last week when Downing Street was left “bewildered” by claims it was not willing to pay the price for access to the EU’s single market.

DON’T MISS
Vote Leave insider reveals how EU could look like after Brexit [FORECAST]
Price of a US post-Brexit trade deal is to cut links with China [INSIGHT]
‘Brexit delivered on time will give every Briton £5,750’ [ANALYSIS]

Mr Barnier also accused the UK Government of not understanding the consequences of Brexit.

No10 has insisted the UK wants a Canada-style freetrade agreement and is even willing to accept some trade tariffs and quotas to seal the deal.

A UK source close to the negotiations said: “Anyone who thinks this Government has got nostalgia for 2018 or Chequers has an imperfect understanding of political developments in the last couple of years.

“The only explanation is that the EU’s arguments on the merits are not working, and they’re reaching for some of the old script – but it doesn’t fit the actual situation that we’re now trying to negotiate.

“Mr Barnier must know his mandate is non-negotiable in at least some important areas, but he’s doing his best with it.”