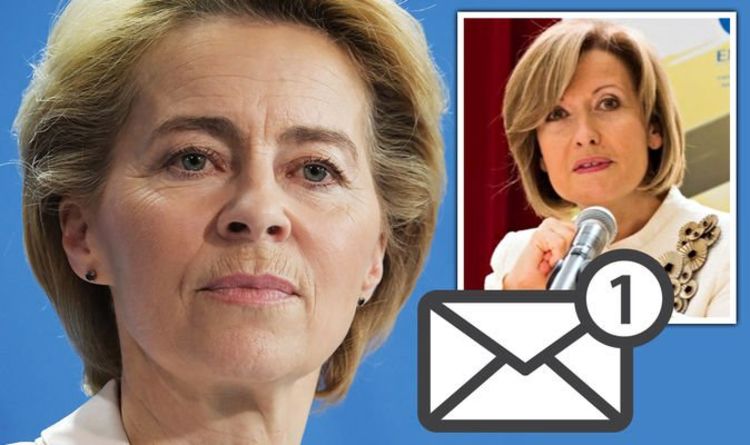 Irène Souka, the European Commission’s director general for human resources, sent a fiery email criticising the EU’s handling of her retirement. The email, sent to her department and copied to thousands of others, including Björn Seibert – the president’s chief of Cabinet, gave the subject line “it’s all about respect”. Ms Souka then detailed her fury at the Commission, and appeared to hit out at Mr Seibert for giving her just four days notice of her official retirement date – as the 67-year-old Greek EU official was expecting her contract to be extended to help ease the transition of the new Commission.

The bombshell email, seen by Politico, announced Ms Souka’s retirement after what she described as a “protracted period of uncertainty” since the new Commission took office on December 1 last year.

In the email, the Greek EU official shared a note she claims to have sent to Mr Seibert the night before and “forwarded to the Commissioner” Johannes Hahn, who heads up human resources.

This note, which started “Dear Bjoern”, said she had offered to stay in post longer in order to “help the new Commission during the first year of its mandate”.

But Ms Souka, who has been in her current job for almost 11 years, did not receive the response she had hoped for and claims to have been left in the dark about how long she was needed, or even wanted.

She wrote: “Today, just four days from my retirement date, I am still no closer… to knowing the final position of the political authorities in order to provide the staff of DG HR with some clarity about my situation.”

She then criticised the EU for being “disrespectful” to her and her staff for failing to inform her of the decision within a reasonable time period.

She said: “What I do question is a working method that lacks empathy and is disrespectful to the staff of DG HR and to myself.

Mr Hahn wrote: “A year ago, Irène SOUKA agreed to a prolongation of her mandate until 31 January 2020 in order to offer her expertise and professional experience in managing a smooth transition of the European Commission.

“I am very grateful to her for this.”

He added that from Saturday, Deputy Director General Bernard Magenhann “will be responsible and ensure business continuity in your important mission.”

Ms Souka first joined the Commission in 1980, and held positions in the Translation Department and the Secretariat General before becoming a director general.