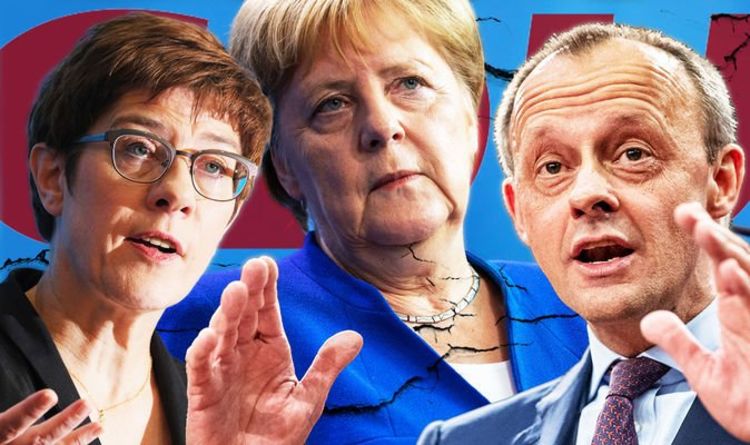 Infighting erupted within the Chancellor’s ruling party as the scale of Sunday’s defeat in the eastern state of Thuringia became clearer. In a fourth electoral drubbing this year, the CDU shed 11.7 percent of its vote to slump into third place behind AfD, which won nearly a quarter of the votes.

Mrs Merkel and her protege and successor Annegret Kramp-Karrenbauer are now being openly blamed for a run of disastrous performances.

The result, which Ms Kramp-Karrenbauer described as “bitter”, has caused a split in the CDU over whether it should break a taboo and work with the radical Left party, which came first in the state election.

Mr Merz said a lack of leadership had cast a fog of inaction over the country for years.

He said: “The appearance of the whole German government is abysmal and something has to change.

“Most of all, it is the Chancellor who is at the centre of the criticism.”

Ms Merkel, who has led Europe’s biggest economy for 14 years, has said she will not stand for a fifth term in 2021 but her bid to choreograph her exit from power by promoting her ally MS Kramp-Karrenbauer is unravelling before her eyes with members openly questioning her suitability as a chancellor candidate after a series of mistakes.

The CDU’s longstanding but increasingly fragile coalition with the Social Democrats (SPD), which is also in turmoil, may not last long beyond a leadership vote in December.

AfD’s success in Thuringia has been expected as support for the anti-immigration, eurosceptic party continues to surge, particularly in eastern Germany.

And the far-right is also capitalising on political turmoil in Spain separatist violence in Catalonia has sparked a new wave of nationalism ahead of elections next month.

Polls show Vox, which became the first ultra-conservative party to win representation since the restoration of democracy in 1978 when it claimed 24 seats in an inconclusive ballot in April, is now on course to win 41 seats, almost doubling its number of MPs in the 350-seat lower house.

The nationalist anti-immigration party policy of wanting to scrap Spain’s 17 regional governments in favour of direct rule has gone down well with voters shocked by weeks of separatist violence in Catalonia.

It also boosted its popularity by opposing the acting Socialist government’s decision to exhume the body of General Franco, the fascist dictator, from a monumental civil war mausoleum and bury him in a cemetery.

And Italy has also seen a surge in right-wing politics with Matteo Salvini’s Lega seeing victory in the regional polls.