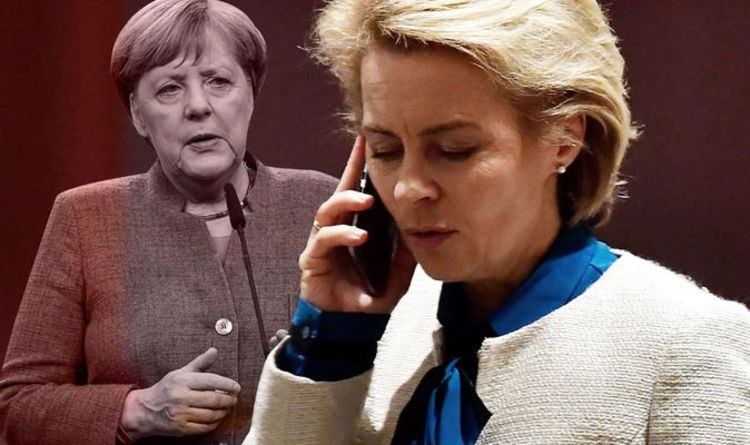 Mrs von der Leyen, Germany’s former defence minister and a close ally of Chancellor Angela Merkel, only took up her new post at the Commission at the start of the month. She insisted she has nothing to hide – but she is nevertheless being investigated by a German parliamentary committee, to whom she is scheduled to give evidence next month.

The controversy centres on how lucrative defence contracts were awarded to outside consultants without proper oversight, as well as claims that the deals were facilitated by a network of personal contacts, according to Politico.

Grilled by German newspaper Spiegel on the matter, she insisted she was not concealing anything, adding: “I’ve turned in both mobile phones that I used as defence minister.

“You’ll have to ask what happened to them there. The devices belong to the ministry, so they had to be returned.”

She said she had only learned about the data deletion “from the papers”, adding: “I haven’t been in the ministry since July 17th.”

The committee investigating the contracts, which will question Mrs von der Leyen on February 13, believes text messages on the device may shed light on what if anything she knows about the scandal.

She told Spiegel: “In my opinion, nothing is lost, because texts are suitable for fast communication.

“It is, of course, the right of the opposition to poke about in all directions and make all kinds of speculation, but in the end it is the result that counts.”

Speaking last week, Tobias Lindner, a Green MP on the investigative committee, said the situation was a “veritable scandal”.

He added: “We have to assume that officials have destroyed evidence. Such behaviour may have criminal implications.”

He added: “All text messages and other short messages covered by the evidence warrants must now be sent to the investigating committee without delay.”

He said: “One needs only to study the reactions of the officers of the German Army, the Bundeswehr, to get an objective picture of her qualification: a big sigh of relief!