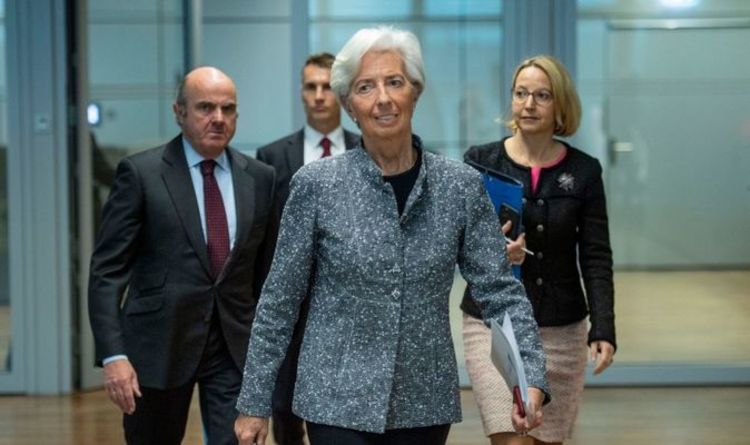 As countries approach what is widely expected to be the worst economic crisis since the Second World War, members of the European Central Bank’s (ECB) Governing Council will meet on Thursday to discuss the stimulus package. Analysts expect ECB President Christine Lagarde to push for broader measures to cushion the blow from the COVID-19 crisis.

In today’s virtual meeting, Ms Lagarde is expected to argue that the bank could go further to avoid fragmentation in the euro area and a squeezing of financial conditions.

When she announced the package on March 19, Ms Lagarde said the bank would use any means necessary to protect the euro.

“There are no limits to our commitment to the euro.

“We are determined to use the full potential of our tools, within our mandate.”

So could her comments mean the stimulus package could be increased to €1 trillion?

Dirk Schumacher, an ECB watcher at Natixis, said the bank will be keen to stave off tensions in the financial system.

A spread refers to the difference in yields between countries, which is a useful indicator when it comes to determining how wary investors have grown of the prospect of owning European debt.

On Thursday morning the euro was broadly flat after preliminary euro zone economic growth data was even more dire than expected.

A preliminary flash estimate of euro zone gross domestic product showed that Europe’s economy contracted by 3.8 percent in the first three months of the year.

This marked the sharpest quarterly decline since the time series started in 1995.

“Almost all of the damage happened in the final two weeks of the quarter, showing how remarkably deep a contraction can become under mandated lockdowns,” he said.

“A recession like the one we’re currently in is unprecedented.”

The market focus now is on the ECB, which is printing cash at a record rate as the coronavirus pandemic sees European countries’ debt surge.