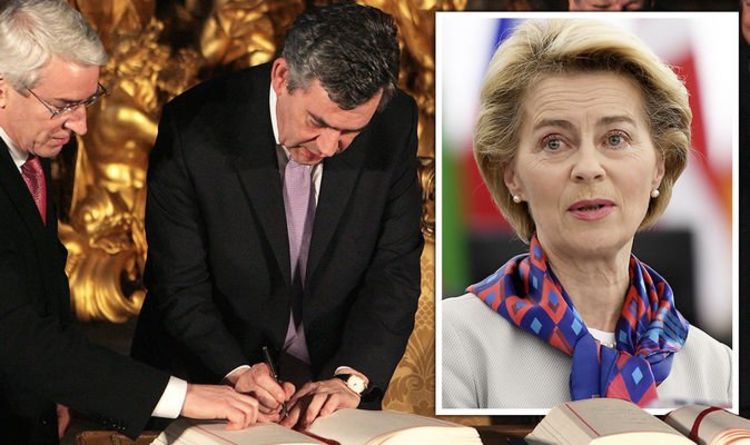 As Brexit Day approaches, a new life outside the bloc is about to become a reality. It will prompt many to look back at the UK’s relationship with Brussels – and it has been a bumpy ride since Edward Heath took Britain into what was then the EEC in 1973. The signing of the Lisbon Treaty in 2007 made the EU even more powerful as a supranational body, as member states ceded sovereignty to further Brussels integration.

Despite Tony Blair promising a referendum on the EU constitution in the Labour Party’s 2005 general election campaign, when this was reshaped and forged into this treaty instead, the UK public were given no say in the matter.

Many criticised his successor Mr Brown’s decision to sign the Lisbon Treaty without a public vote on it.

Because of the backlash, Mr Brown dodged the main signing ceremony to avoid photographs that would make things awkward back home.

The other EU leaders gathered in a 500-year-old monastery in Lisbon for a special ceremony to sign the landmark treaty, expecting everyone to be there as it was not the “done thing” for someone not to turn up.

Then-French president Nicolas Sarkozy famously lambasted his absence in English, as he shouted: “We need Gordon!”

But Mr Brown was in London at the time – not because he disagreed with the treaty – but because of the potential TV and press coverage using the image of him celebrating with his European counterparts.

He was the only national representative who was planned to sign the treaty in the ceremony, but did not take part, leaving Foreign Secretary David Miliband there instead.

The Prime Minister arrived three and a half hours late and awkwardly signed the document in a small room, while on the other side of the door the 26 other EU leaders were finishing lunch.

The reason cited for his absence was that he was supposed to elsewhere – appearing before a committee of British MPs.

However, BBC political editor Nick Robinson claimed that Mr Brown was able to attend but decided not to and opposition parties also ridiculed his excuse, with the Conservatives branding the move “gutless”.

Tory MPs also referred to it as a “stunt” that proved Mr Brown was “not very good at international diplomacy”.

The Liberal Democrats claimed it raised “serious questions” and Chris Huhne said it showed “inept and peevish behaviour that leaves Gordon Brown’s reputation for honest dealing with our EU partners hanging by a thread”.

Elements of the media also attacked Mr Brown, suggesting that he was ashamed to sign the treaty.

A senior EU diplomat told The Guardian at the time that Mr Brown’s “dithering” was the talk of the EU-Africa summit days later.

“To anti-Europeans he’s simply run away and accepted the signing of the treaty, to pro-Europeans he has simply refused to stand his ground and fight, and for the rest he has opted out.

“His reputation in Europe among heads of government is hanging by a thread.

“He has no position in Europe, he occupies no ground. If he wants to send a Euro-signal that he’s indecisive, he’s just sent it.”

This event highlights the uneasy relationship the UK has always had with the EU – always at an arm’s length.