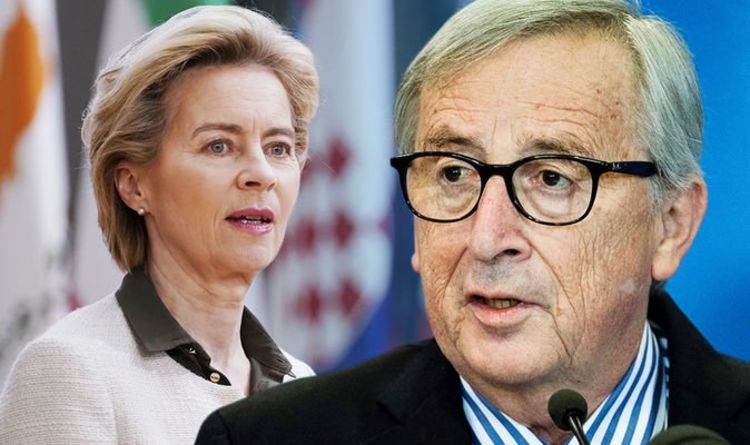 Mr Juncker told Euronews he did not like the implication that welcoming migrants from outside Europe is against the continent’s values. It is highly unusual for an outgoing president to make such direct criticisms of their successor, butt the controversial Luxembourg politician was not alone in his views. When Ms von der Leyen announced her top team, she included responsibility for migration in the remit of Greece’s commissioner-designate, Margaritis Schinas under the newly created “Protecting the European Way of Life” role.

There was a significant backlash from more than one party in the European Parliament, with some branding it an “insult” and “not acceptable”.

Ms von der Leyen was also accused of using a “dog-whistle” phrase used by the far right, not one that should be used by the Commission, which views itself as a defender of liberal values and diversity.

Mr Juncker himself said: “I don’t like the idea that the European way of life is opposed to migration.

“Accepting those that come from far away is part of the European way of life.

He added that the job title did not correspond with Mr Schinas’ values, who had been his chief spokesperson for five years.

Mr Juncker said he thinks Ms von der Leyen’s decision on the title will be reversed, saying: “I think that this will have to be changed.”

Meanwhile, French Green MEP Karima Delli tweeted that a majority of MEPs agreed at a meeting of senior lawmakers to send a letter to the Commission President asking her to change the name of Ms Shinas’ portfolio.

Mr Juncker did not hold back in his assessment of Ms von der Leyen in which he also claimed her nomination had not been “highly transparent” and criticised the European Parliament for not playing “its role”.

This is because Ms von der Leyen had not run as a “Spitzenkandidat” in the election, a way of electing the Commission President aimed to improve the democratic process.

Mr Juncker was the first to be elected in this way.

He said of the European Parliament: “They claimed that only a ‘Spitzenkandidat’ should become President.

“But it did not play its role and accepted that the Council appointed two vice-presidents of the Commission and that is not the business of the European Council.”

The way the Commission President is chosen is the European Council gets to nominate a candidate, which is then confirmed by MEPs.

The Spitzeknkandidat, German for ‘lead candidate’ is a process of linking European Parliament elections to this appointment.

In the run up to the EU elections, each major political group in the European Parliament nominates their candidate to be the next European Commission President.