EU iPhone warning: Why you could be hit by new... 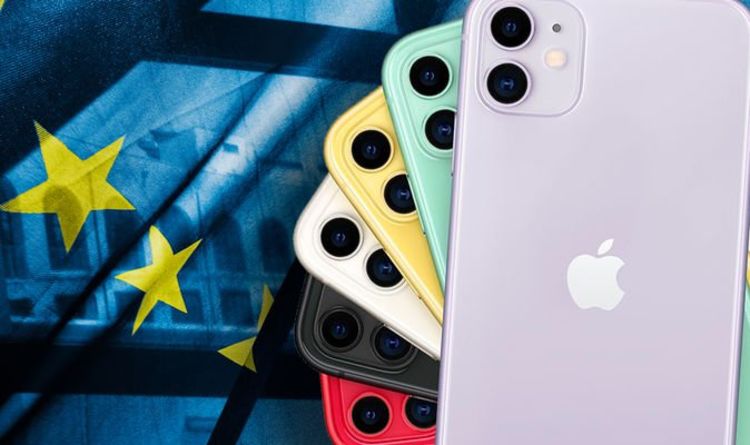 If the EU has its way then millions of Apple iPhone users could soon be forced to buy new accessories and cables for their beloved smartphones. New laws are being considered which will force all technology companies to use a single charging method rather than the current three which are universally used.

This, they say, should help cut down on electronic waste and make it far less confusing for consumers who could then have just one single lead for all of their Apple and Android devices.

If passed, it would mean the end of Apple’s famous Lightning cable as the US technology firm would be forced to include a standard USB-C charging port on all of its phones and tablets.

Although that may sound like good news for some, Apple is fighting back against the ruling saying it “would harm consumers in Europe and the economy as a whole.”

Apple’s lightning port has been around since 2012 and offers a very convenient and robust way of refilling the battery.

Its smaller size has also helped Apple cram more technology inside their devices something that could be affected if they were forced over to the larger USB-C port.

JUST IN: Apple’s next MacBook update could seriously speed-up your old laptop

Another issue for Apple is the fact that US consumers wouldn’t be hit by the same rules meaning different phones may have to launch depending on where you live in the world.

And the ban could even mean they are not allowed to produce replacement Lightning cables which could cause huge issues for those that want to hold on to their existing phone for a long period of time.

All of this, they say, “would have a direct negative impact by disrupting the hundreds of millions of active devices.”

News of the change surfaced last week but Apple has now responded with a full statement in which it says: “Apple stands for innovation and deeply cares about the customer experience. We believe regulation that forces conformity across the type of connector built into all smartphones stifles innovation rather than encouraging it, and would harm consumers in Europe and the economy as a whole.

“More than 1 billion Apple devices have shipped using a Lightning connector in addition to an entire ecosystem of accessory and device manufacturers who use Lightning to serve our collective customers. Legislation would have a direct negative impact by disrupting the hundreds of millions of active devices and accessories used by our European customers and even more Apple customers worldwide, creating an unprecedented volume of electronic waste and greatly inconveniencing users.

“We do not believe there is a case for regulation given the industry is already moving to the use of USB Type-C through a connector or cable assembly. This includes Apple’s USB-C power adapter which is compatible with all iPhone and iPad devices. This approach is more affordable and convenient for consumers, enables charging for a wide range of portable electronic products, encourages people to re-use their charger and allows for innovation.

“Prior to 2009, the Commission considered mandating that all smartphones use only USB Micro-B connectors which would have restricted the advancement to Lightning and USB Type-C. Instead, the Commission established a voluntary, industry standards-based approach that saw the market shift from 30 chargers down to 3, soon to be two — Lightning and USB-C, showing this approach does work.

“We hope the Commission will continue to seek a solution that does not restrict the industry’s ability to innovate and bring exciting new technology to customers.”

It’s worth mentioning that Apple does already include USB-C on some of its devices with the latest MacBook Pro and MacBook Air both adopting this technology.

The flagship iPad Pro also features USB-C to refill the battery. Apple introduced the change to its best-selling tablet range back in 2018, but there’s still no sign of it coming to the iPhone.

As we mentioned earlier, USB-C is slightly bigger than the Lightning port which means it takes up more valuable space inside the already cramped phone.

Apple must also be aware that millions of iPhone users already have Lightning accessorises and a change would make these redundant – something that wouldn’t be hugely popular.