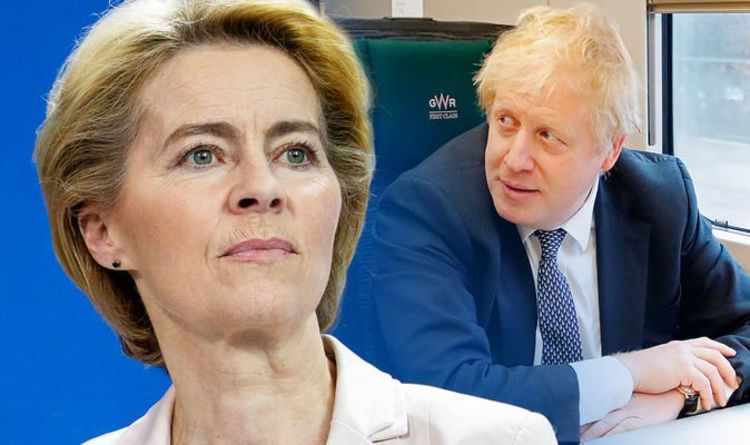 Boris Johnson was accused of “undermining the regular functioning” of the bloc after telling Ursula von der Leyen the country would not send a eurocrat to Brussels before next month’s general election. The Government been given until next Friday to answer the allegations, which EU officials have fast tracked. Mr Johnson last night instructed Sir Tim Barrow, his EU ambassador, to inform Brussels that Britain couldn’t nominate a commissioner ahead of the December 12 snap ballot.

EU officials alleged that the Brexit-supporting Government was hiding behind their domestic legal system to avoid putting forward a name.

The bloc demanded an answer by the end of next week as Mrs von der Leyen hopes to be in office by December 1.

“In its letter, the UK authorities consider that they are not in a position to suggest a candidate for the post of EU commissioner in view of the upcoming general election,” officials said.

“The European Commission recalls that, in accordance with established EU case-law, a member state may not invoke provisions prevailing in its domestic legal system to justify failure to observe obligation arising under Union law.”

A European Commission statement added: “The United Kingdom is invited to submit its aberrations on the letter of formal notice at the latest by Friday November 29, 2019.

“After examining these observations, or if no observations are submitted within this time-limit, the Commission may, if appropriate, issue a Reasoned Opinion.”

If legal action escalates further, Britain could be dragged, kicking and screaming, to the European Court of Justice, where the country faces hefty fines.

Responding, a UK official said: “We have written to the EU to confirm that pre-election guidance states the UK should not normally make nominations for international appointments during this period.”

European sources said the UK’s decision to not nominate a candidate will not hold up Mrs von der Leyen’s ambitions to replace Jean-Claude Juncker, as Europe’s top bureaucrat by next month.

The former German defence minister was handed a boost this afternoon as members of the European Parliament gave the green light to the controversial French commissioner candidate Thierry Breton, and gave a preliminary nod to the Hungarian and Romanian candidates.

When asked whether Mr Johnson’s refusal to nominate a commissioner would hinder this process, an offical close to Mrs von der Leyen replied: “Non!”

A senior EU diplomat added: “On a political level, it has no importance. On a legal level, that might be an issue.”

Remoaners seized on the EU’s actions, using it as a stick to beat Mr Johnson with.

Caroline Voaden, Leader of the Lib Dem MEPs, said: “Under Boris Johnson, Britain’s reputation in Europe lies in tatters, we should be leading in Europe, not leaving.

“A UK Commissioner would ensure we are treated as equal partners as an EU member state and fully represented in Ursula Von der Leyen’s new Commission.

“Boris Johnson should urgently consult with other parties and propose a candidate capable of furthering the interests of the EU as a whole.”

Coronavirus POLL: Would YOU break lockdown restrictions to see your family at Christmas?

ByBoris Johnson is considering a month-long lockdown to begin in England next week in a bid to ease infection rates in order to allow...
Read more
U.K.

What are you THINKING, Boris? Peston shames PM over lockdown -'Catastrophic misjudgement'

ByThe ITV political editor has lashed out at the Prime Minister and warned his “biggest mistake” was attempting to simultaneous suppress the virus and...
Read more
U.K.

By"He was a global legend but, first and foremost, a patriotic and proud Scot - his towering presence at the opening of the Scottish...
Read more
U.K.

BySean Connery, the Scottish-born actor who rocketed to fame as James Bond and became one of the franchise’s most popular and enduring international stars,...
Read more