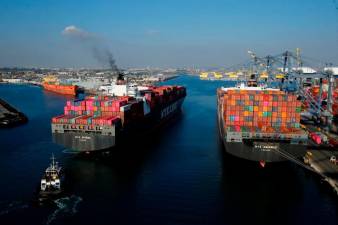 DUBLIN: The European Union and United States are taking slow, small steps towards a “mini” trade deal, European Trade Commissioner Phil Hogan said on Friday ahead of trip to Washington this month.

Hogan, who was promoted from the role of EU farm chief in November, has made resetting strained EU-U.S. economic relations a top priority.

European officials have raised the possibility of negotiating a “mini deal” with the United States, which has threatened to impose car tariffs on the European Union if no trade accord is struck.

“We are taking slow and small steps towards a ‘mini deal’. I will be in Washington DC next week and I hope we will make further progress then,“ Hogan said, according to the text of a speech due to be delivered at a conference in Dublin.

“There is currently momentum for both sides to examine a possible new understanding on trade issues.”

Hogan will travel to Washington to give a speech at Georgetown University on March 17 on his ideas for reform of the World Trade Organization. Officials have not announced whether he will meet the U.S. trade representative, Robert Lighthizer, during the trip.

On Friday, the Irishman said the Geneva-based trade body needed a “profound overhaul” and “not just tweaking at the margins”.

“I am hopeful that this speech can act as a catalyst for further action and global collaboration, particularly across the Atlantic.”

The EU, China and 15 other WTO members agreed in January to create a temporary mechanism to settle trade disputes after U.S. moves to block the appointment of trade judges left the WTO with no mechanism to act as the umpire of global trade.

“We agree with many of the U.S. criticisms of the WTO, now we need to find common ground on the solutions,“ Hogan said.

Hogan will also travel to Canada on May 18 for a meeting of the “Ottawa Group” of 13 WTO members, including Australia, Brazil and Japan, that are seeking to craft consensus on WTO reform. -Reuters