EU warning: Why Winston Churchill thought bloc would be 'DISASTER' 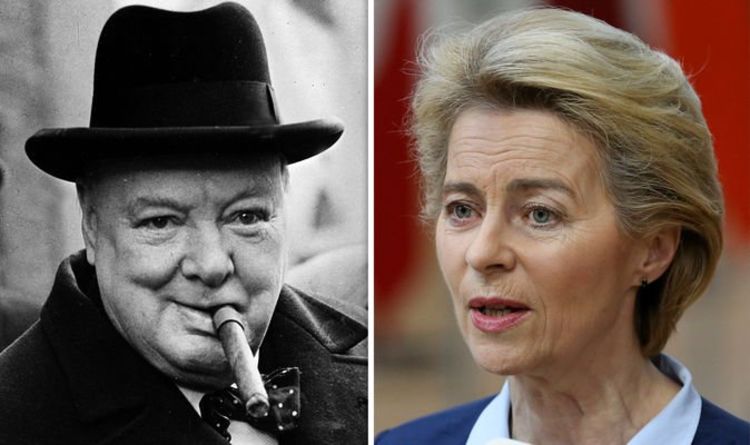 Mr Johnson is set to lead the UK out of the EU tomorrow at 11pm on Friday, three and a half years since the EU referendum result and 47 years since the nation first joined. Last night, Mr Johnson’s Brexit deal was ratified by the European Parliament and a lively final day included Nigel Farage’s Brexit Party waving illicit Union Jacks and European MEPs signing Auld Lang Syne. After Brexit day, Britain will enter a transition period in which its future relationship with the EU will be negotiated.

Mr Johnson is expected to say in a speech next week that sovereignty is more important than frictionless trade and, as such, he is prepared to accept post-Brexit border checks.

In 2014, Mr Johnson published a biography of his political hero, Winston Churchill, called ‘The Churchill Factor’, detailing the life and legacy of the wartime leader.

In the hefty tome, the now-Prime Minister explored Mr Churchill’s relationship with Europe and how the EU could have turned out so differently.

The idea of a European bloc started out with the Schuman Plan, a proposal by French foreign minister Robert Schuman in 1950 to create a single authority of steel and coal in Europe.

Clement Attlee and his Labour Government refused an invitation to discuss this idea and was criticised heavily by Mr Churchill, who felt that the UK should be at the table.

Mr Churchill, then-Leader of the Opposition, warned MPs that without the UK’s influence this bloc would become a “neutral force” between the US and Soviet Union.

Schuman’s plans for a bloc would eventually become the European Coal and Steel Community in 1952, the precursor to the European Economic Community (EEC), created in 1957, and later the EU in 1993.

Mr Johnson wrote in his book: “If Britain fails to engage, Churchill warns, then there is a risk that the European bloc will because a neutral force, equidistant between Moscow and Washington; and that, he believes, would be  a disaster.”

However, according to Mr Johnson, the damage was done, the clay had set and the bloc was not structured in a way that worked for the UK.

He wrote: “It was almost a quarter of a century before Britain finally joined – by which time the structures of the EU had been fixed in a way that was uncongenial to Britain, and to purist concepts of national democrat sovereignty.”

Mr Johnson wrote that he believes Mr Churchill would have accepted the invitation to join initial talks in 1950, had he been in power, and that he made this intention clear at the time.

Mr Churchill told MPs in the Commons: “It will be far better for us to take part in the discussions than to stand outside and let events drift without us.

“The absence of Britain deranges the balance of Europe.”

Therefore, the suggestion is that, had Churchill been Prime Minister, the UK would have been part of the bloc from the beginning and therefore shaped its procedures.

Today, the EU’s unfriendliness and incompatibility with the UK manifests itself in a number of ways.

For example, the UK pays more into central European funds than it receives – but post-Brexit will regain control of its finances.

ByPolice were called to Usher Road in Bow this evening after a woman suffered a head injury. She was taken to a London hospital...
Read more
U.K.

ByGovernment scientists have warned the current three tier lockdown system does not go far enough to get coronavirus under control and have urged the...
Read more