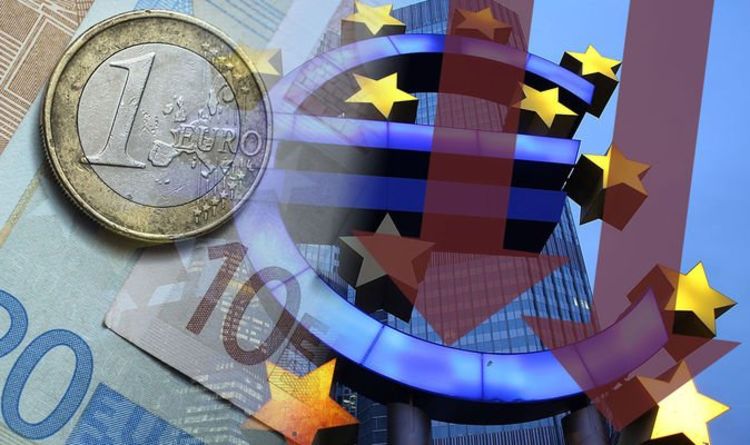 The single currency is down to its lowest level since May 2017 as the market advisers admit their fear over the European economy, just two weeks after Brexit. The European economy stalled in the last quarter with Gross Domestic Product (GDP) rising by just 0.1 percent between October and December 2019.

The euro has pushed down to just 1.086 against the dollar, while the Stoxx 600 index of EU-listed companies has lost 0.5 percent.

Overall the energy sector has been hit the hardest, dropping 2.16 percent as Jim Reid of Deutsche Bank,  admitted “concerns over the European economy linger”, after the currency has fallen seven of the last eight days.

Industrial production of the EU 27 also continued to decrease as it approached recent lows not seen for four years.

Neil Wilson of Market.com said: “The euro is weaker for several reasons but the deterioration in industrial production numbers yesterday was important.

“Output declined by 2.1% in the final month of the year.

The eurozone’s continued fall comes as global oil demand will fall this quarter for the first time in a decade the International Energy Agency (IEA), has warned.

Demand is now expected to fall by 435,000 barrels per day year-on-year.

In newly released figures from the European Commission today, two of the biggest countries and economies in the EU, France and Germany have been predicted to have the slowest growth of all the 27 at just 1.1 percent.

In their forecast, the EU warned coronavirus was a “key downside risk” to the economy.

The EU warned: “The outbreak and spread of the ‘2019-nCoV’ coronavirus and its impact on public health, human lives and economic activity has been a source of mounting concern.

“It has spurred uncertainty about the short-term prospects of the Chinese economy and about the degree of disruption across borders at a moment in which global manufacturing activity remains at a cyclical low.

“The baseline assumption is that the outbreak peaks in the first quarter, with relatively limited global spillovers.

“The duration of the outbreak, and of the containment measures enacted, are a key downside risk.

“The longer it lasts, the higher the likelihood of knock-on effects on economic sentiment and global financing conditions.”

There are also feard the supply chain could be affected by the virus and therefore hinder certain industries.