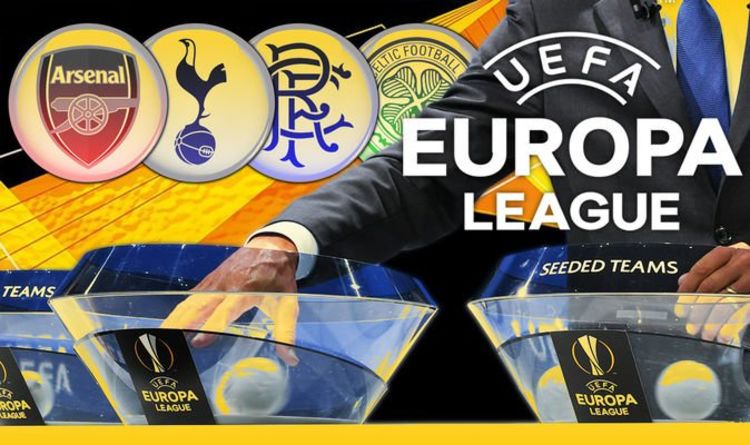 Neil Lennon’s side earned their place in pot one but that did no benefits when the balls were drawn.

Steven Gerrard’s Rangers also have a tough group to get out of as they were placed alongside Benfica, Standard Liege and Lech Poznan in Group D.

Arsenal will be pleased with their Group B opponents: Rapid Wien, Molde and Dundalk

While Leicester avoided the biggest pot 1 teams as they gear up for clashes against SC Braga, Athens and Zorya Luhansk.

Jose Mourinho’s Tottenham are in Group J alongside Ludogorets, LASK and Royal Antwerp.

12.45pm: And that’s a wrap folks! What a nightmare group for Celtic alongside Sparta Prague, AC Milan and Lille. It would have been exciting for fans if they could travel to these great cities but it look extremely unlikely they will be permitted to do so.

Rangers also have a difficult group but Arsenal, Tottenham and Leicester all avoided the worse case scenarios.

12.10pm: Inter Milan striker Romelu Lukaku has been presented with the Europa League player of the season award for 2019/20 campaign. Seems to justify his move from Man Utd, right?

After being presented with the trophy last week, Lukaku said: “I want to thank Internazionale for putting me in this position, for playing for a team that I love and a team I supported as a child. I want to congratulate Sevilla for winning the trophy, and I want to thank my mum, my agent, Antonio Conte and everyone at the club, the board and for the trust in supporting me throughout this season.

“But most importantly I want to thank my teammates, they are like brothers and every day I come in smiling because of them.

“We had a great season and this season we’re going to be even better.”

11.45am: Not long now until the draw gets underway. A reminder of how the four pots look;

11.30am: Good morning and welcome to Express Sport’s live coverage of the Europa League draw where five British teams will discover their group-stage fate. The draw is set to commence at 12pm and we will bring you all of the latest updates as soon as it happens.