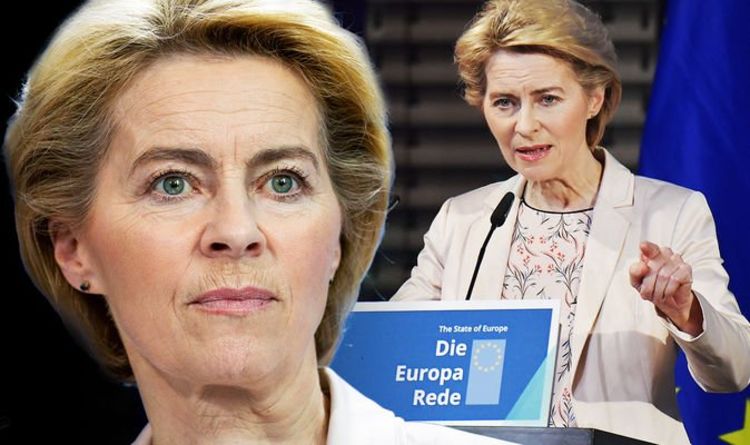 She also took a potshot at Emmanuel Macron after the France’s President vetoed accession talks with Albania and North Macedonia last month, insisting the EU must “honour its word”. In a speech on the state of Europe delivered in Berlin, European Commission President-elect Mrs von der Leyen stressed the EU’s strengths as a bastion of openness and democracy in a troubled world and said Brexit had forged a tighter group out of the remaining members of the bloc. She added: “We must go our own European way with confidence.

“Soft power alone won’t suffice today if we Europeans want to assert ourselves in the world.

“Europe must also learn the language of power.”

“That means on the one hand developing our own muscles – where for a long time we could lean on others, for example in security policy.

She added, in reference to trade ties with China: “On the other hand, it means engaging our available power with more focus.”

Ms Von der Leyen, a close ally of German Chancellor Angela Merkel, takes over as Commission president on December 1, having pushed her start date back a month.

She said: “We must be more strategic with a view to Europe’s external interests,” emphasising that this included EU enlargement policy.

“They complied in full. Now we must honour our word and facilitate accession talks.”

Turning to climate policy, she said Europe could play a leading role in the world and show that green investments can be profitable and sustainable.

She added: “We can and must make sure that Europe becomes the first climate neutral continent by 2050.

“Therefore, I will present the first European climate protection law that implements this political goal into binding law.

“We only have this planet. We need to act now.”

A former German defence minister who will be the Commission’s first woman chief, Ms von der Leyen was picked by EU leaders as a unity candidate and part of a package to break a stalemate over who should run the EU’s top institutions.

But she had a difficult time as German defence minister, with former German MEP Hans-Olaf Henkel telling Express.co.uk in July: “One needs only to study the reactions of the officers of the German Army, the Bundeswehr, to get an objective picture of her qualification: a big sigh of relief!

“Von der Leyen is responsible for the biggest disarmament of a German army after its defeat in two World Wars.