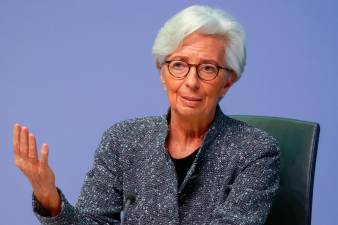 The latest major central bank to jump into the fray, the ECB launched a flurry of measures to cushion the impact of the virus, including increased bond purchases and cheap loans to banks.

But it surprised observers by leaving key interest rates unchanged.

“The spread of the coronavirus COVID-19 has been a major shock to the growth prospects of the global economy and the euro area,” Lagarde told reporters in Frankfurt. “Even if ultimately temporary by nature, it will have a significant impact on economic activity.”

Lagarde eurozone governments for not taking faster and more drastic action to contain the economic fallout from the coronavirus pandemic.

“I’m particularly worried about… the complacency and slow motion process that would be demonstrated by the fiscal authorities of the euro area in particular,” she said.

Lagarde urged governments to step up and do their bit alongside monetary policymakers as fears mount of a credit crunch that could destabilise banks and hurt small businesses.

“Governments and all other policy institutions are called upon to take timely and targeted actions,” she said.

“In particular, an ambitious and coordinated fiscal policy response is required to support businesses and workers at risk.”

Whether the eurozone manages to avoid a recession will “clearly depend on the speed, the strength and the collective approach that will be taken by all players,” she said.

As part of its stimulus package, the ECB’s governing council agreed a new round of cheap loans to banks, known as long-term refinancing operations (LTROs) “to provide immediate support to the euro area financial system”.

They also eased conditions on an existing “targeted” LTRO programme, aiming to “support bank lending to those affected most by the spread of the coronavirus, in particular small- and medium-sized enterprises”.

And the ECB will pile an extra €120 billion (RM576 billion) of “quantitative easing” (QE) asset purchases this year on top of its present €20 billion per month.

The QE scheme will include “a strong contribution from the private sector,” the ECB said, as room to buy government debt while respecting self-imposed limits has grown tight.

On top of the monetary measures, the ECB’s banking supervision arm said it would allow banks to run down some of the capital buffers they must build up in good times to weather crises.

Its teams supervising individual lenders may provide more flexibility to institutions under their remit, such as giving them more time to patch up shortfalls in their risk management, while a broader range of assets will count towards the watchdog’s capital requirements.

Lagarde said the latest salvo of stimulus aid fired off by the ECB can help Italy, the worst-affected country by the coronavirus outside China.

“Italian banks, Italian households, enterprises will be fully beneficiaries and eligible to all of the tools that I have just mentioned. All of that can also help Italy,” said the ECB chief.

But 10-year bonds of the EU’s third biggest economy took a hammering after the ECB announced its package.

The closely-watched spread between Italy’s and Germany’s bonds widened from 214 basis points before the session to 246 basis points as Lagarde closed her press conference.

“But we are not here to close spreads,” Lagarde said when asked if more targeted ECB action was necessary for Italy.

Lagarde also said said she and vice president Luis de Guindos won’t appear together at the next ECB press conference unless the coronavirus outbreak is contained,

“Unless the situation develops very rapidly for the better it is unlikely you will see both of us at the next press conference as we are working to split teams, including at the executive board level,” she said.

The next meeting of the Governing Council would be held entirely online, Lagarde added. – AFP, Reuters