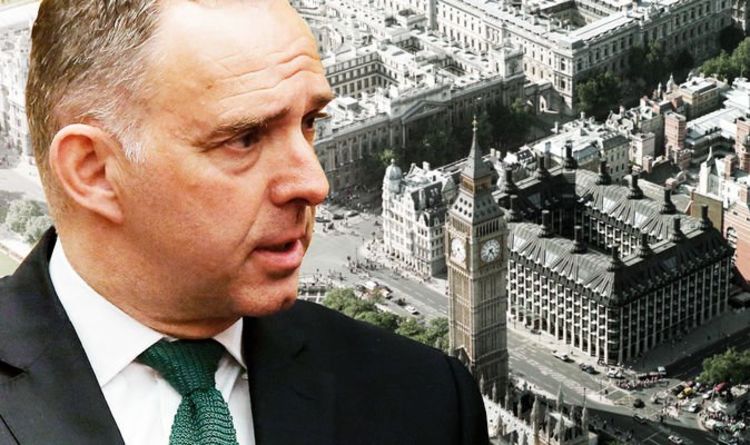 Rupert Lowe, who represents the West Midlands in the European Parliament, said Boris Johnson’s Brexit deal was “not good, given the ridiculous negotiations.” Mr Johnson sealed a new deal in October, which will see the entire UK leave the Customs Union by January 31 2020, allowing Britain to negotiate its own trade deals in the future. Mr Lowe argued that Britain sold itself short in talks with Michel Barnier and his chums because of a pro-Remain and incompetent civil service.

In an exclusive interview with Express.co.uk he said: “Of course we sold ourselves short, because we have a bunch of idiots, both in terms of our elected representatives and even worse most of the civil service are not fit for purpose.

“I meet these people, they are incompetent most of them. They get huge pensions, they are not putting the British people at the top of the agenda.

“Look at Lord Salisbury, look at the people who used to be in charge. They always used to put the interests of the British people at the top of the agenda.

“Do you think these people are doing that? Are they hell, they’re not.

“They want this post-war protectionist bloc, which removes any responsibility from our civil service to actually do anything.”

The former owner of Southampton FC was adamant that competent and unbiased negotiators could already have thrashed out a trade deal with the EU, insisting that Europe could not afford a no-deal outcome.

He explained: “We held all the cards and we weren’t negotiating as we should have been.

“The negotiation process was utterly and totally flawed, because you’ve got people who want to “remain” doing the negotiations and people who keep telling us that we have to have a trade deal with Europe.”

JUST IN: Varadkar desperate for ‘access to the British market’

He said: “They (EU) put tariffs on, they lose. I am a former farmer. They threatened to put 40 percent tariffs on our lamb.

“Well, we import something like £50 billion more than they do from us.

He explained: “I am absolutely adamant that we as a country, our biggest problem, and this is where Nigel Farage is absolutely right, we need to change politics for good.

“We as a country are not being properly represented by able people who are acting in the best interests of the electorate. That is a big problem.”