Eurozone circus: Barnier ‘is like a clown trying to hide an elephant under a cloak’ 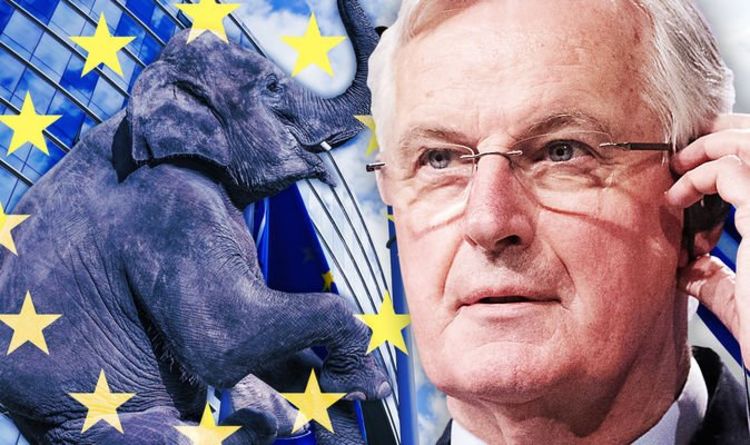 Barney Reynolds, a partner at Shearman and Sterling LLP, and a specialist in financial services law made his remarks after the launch of his new paper, Managing Euro Risk, in which he spells out why the world needs to be wary of the way the EU manages its monetary union. And he told Express.co.uk the Bank of England currently plays a crucial role in keeping tabs on the euro area – stressing the importance of the bloc agreeing to abide by UK rules, rather than vice versa, after the end of the year. He said: “Economists talk about the doom loop whereby the whole system can choke on itself, which is why someone needs to look at the system as a whole to make sure the entire system is safe.

“And at the moment, within the EU, the Bank of England is doing that.

“After leaving, they are saying ‘No, no, you’ve got to do exactly what we say, we’re going to control you, you must jump to our tune,’ which is absurd when we’re the ones managing this risk.

Mr Reynolds stressed: “If we’re going to allow for dealings with the EU 27 counterparties in a reliable way, and allow their financial institutions to have branches here which carry on dealing, as now, in the global markets, then we need a predictable equivalence arrangement, which means we need it to be binding, high level outcomes-based, subject to independent adjudication and absolutely crystal clear.”

And he stressed the alternative would be extremely unpalatable for Brussels.

He explained: “If we were to have to address this with the Americans and call a halt to all the EU’s current dealings, it is going to cause the most awful outcomes for the EU’s economy, which is in nobody’s interests.”

Mr Reynolds deployed a colourful metaphor to make his point, saying: “This is the elephant in the room.

“It’s like being at the circus with some clowns in the corner noisily sweeping up elephant dung and then there is a black cloak over the elephant and they are pretending it is not there.”

As for whether EU Brexit negotiator Michel Barnier and his colleagues were aware of the gravity of the situation, Mr Reynolds said: “Is it deliberate? Or is it just accidental? My belief is they don’t appreciate the full situation themselves.

“I think that the EU needs a wake-up call on this key fundamental point.

“The point is they are not in a position to dictate terms to anyone. Least of all us – they need us to carry on mitigating this risk in the way that we’re doing now.

“They will have to accept that we will do it on such terms that we determine are fair, sensible and safe for the global market and forget the idea of dictating terms to us on financial services.”

He said: “They can’t with a straight face talk about level playing field stuff when they’re doing this.

“A lot of our people are still worried about the UK and think of us as pygmy facing an 800 pound gorilla.

“We need to rethink that because actually it’s not so – we are more than equals.

“The EU will be confronted over the next five months or so with a choice.