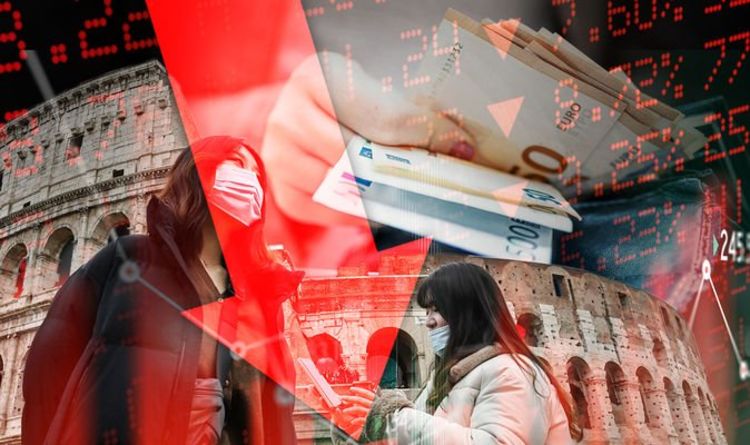 The shock prediction is more than double the five percent slump previously envisaged by the firm’s analysts. As lockdowns are extended across the European Union’s single currency bloc, fears grow that the restrictive measures will cause irreparable economic damage. The recovery is now likely to be more gradual than previously forecast, according to Morgan Stanley’s army of economists. Recent figures put the joint nominal GDP of the European Union for 2018 at $ 18.8Trillion or €17.32Trillion. Based on those estimates the cost to the EU nations would be almost €2Trillion.

They note that the rebuilding phase has been delayed by governments maintaining their lockdowns for longer than expected.

Investments and consumption are likely to take time before they pick up again, causing a “deeper initial fall”.

The Wall Street firm said: “We continue to believe that the recovery will depend on significant government stimulus, but to that end we see a good chance of EU leaders agreeing on a recovery fund.”

Morgan Stanley’s stark warning echoes that of the European Central Bank handed down to EU leaders at a virtual summit last week.

Of its rivals, Morgan Stanley’s forecasts are the most alarming of any made for the Eurozone’s future.

JP Morgan has predicted a nine percent slump while UBS has placed their forecast at just -4.5 percent.

It comes after EU leaders last week failed to reach a post-pandemic recovery compromise during a crunch internet video summit.

Presidents and prime ministers ended their fourth virtual summit with questions still left on how the bloc can distribute funds to the most damaged economies.

Officials, however, admitted they are unlikely to reach an agreement on the recovery fund until they can meet in person.

MUST READ: Merkel warned of ‘disintegration of Europe’ if no solidarity with EU

Ursula von der Leyen, the European Commission’s president, has warned this could run to more than €2 trillion.

Wealthy member states, such as Germany, would most likely be expected to increase their budget contributions as a result.

Chancellor Angela Merkel has said her country would be prepared to send more cash to Brussels for a limited time “in the spirit of solidarity”.