Eurozone on the brink: ‘The euro is a trap – ALL countries were better off before joining’ 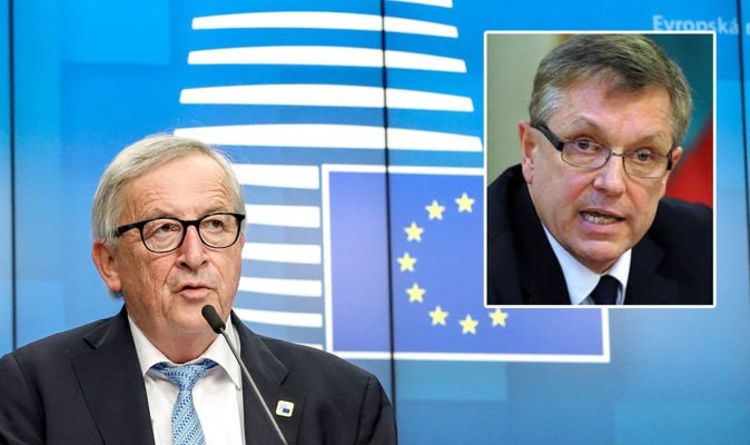 Hungary has not yet signed up for the Eurozone – those countries which use the euro as currency – which includes 19 out of the 28 EU member states. The country still has its own currency, the Forint – and Gyorgy Matolcsy’s withering assessment highlights the grave doubts within Eastern European countries including his own, as well as Poland and the Czech Republic, at the prospect of becoming members. Mr Matolcsy, writing in the Financial Times, said: “The time has come to seek a way out of the euro trap.”

Rejecting what he called the “harmful dogma” of the orthodox view suggesting the euro was the “normal” next step towards the unification of western Europe, Mr Matolcsy said none of the preconditions for such a process had been met.

He added: “Two decades after the euro’s launch, most of the necessary pillars of a successful global currency – a common state, a budget covering at least 15-20 percent of the eurozone’s total gross domestic product, a eurozone finance minister and a ministry to go with the post – are still missing.”

The roots of the euro, he suggested, lay in France’s desire to prevent German dominance after unification, French President Francois Mitterand succeeding in convincing Germany’s Chancellor Helmut Kohl ditching the Deutschmark in favour of the euro was a price he need to pay for a unified country.

“The inclusion of southern European economies in the eurozone led to an exchange rate that was weak enough to allow the Germans to become the strongest global export machine in the EU.”

As a result of what he called this “windfall opportunity”, the Germans had become “complacent”, Mr Matolcsy argued, adding: “They neglected to upgrade their infrastructure or to invest enough in future industries.

“They missed the digital revolution, miscalculated the emergence of China and failed to build pan-European global companies. At the same time, companies like Allianz, Deutsche Bank and Bayer launched fruitless efforts to conquer Wall Street and the US.

“Most eurozone countries fared better before the euro than they did with it.

“During the 2008 financial crisis and the 2011-12 eurozone economic crisis, most members were badly hit, having piled up huge government debts.”

Mr Matolcsy said the primary reason for the euro – the need to strengthen the bond between European powers and defend the bloc against the Soviet Union – had disappeared with the collapse of the USSR.

He said: “The raison d’être of the currency ended precisely as it was being born.

“The time has come to wake up from this harmful and fruitless dream.

“A good starting point would be to recognise that the single currency is a trap for practically all its members – for different reasons – not a gold mine.”

It was time, he said, for EU states both in and outside the eurozone to admit that the euro had been a “strategic error”.

He concluded: “We need to work out how to free ourselves from this trap. Europeans must give up their risky fantasies of creating a power that rivals the US.

“Members of the eurozone should be allowed to leave the currency zone in the coming decades, and those remaining should build a more sustainable global currency.

“Let’s celebrate the 30th anniversary in 2022 of the Maastricht treaty that spawned the euro by rewriting the pact.”