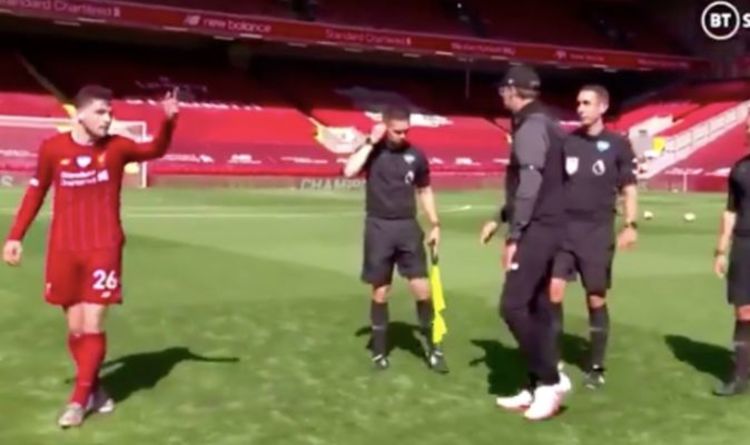 Andy Robertson couldn’t bite his tongue at the full-time whistle as he confronted the officials on their failure to award him a penalty in Liverpool’s 1-1 draw with Burnley. The result means the Reds will now have to win all three of their remaining matches against Arsenal, Chelsea and Newcastle if they’re to beat Manchester City’s points record from 2017/18.

Liverpool did not quite do enough to win the game despite several fine saves from Nick Pope.

Roberto Firmino also hit the post with Mohamed Salah squandering a glorious chance to win the game in stoppage time.

Andy Robertson enjoyed a fine afternoon and got his name on the scoresheet but he felt he should have had a spot-kick in the second half.

He was brought down by Johann Berg Gudmundsson in the box but replays showed the Iceland international got a toe to the ball before swiping Robertson’s legs.

“What’s the point of having yous in the middle.”

By this point Jurgen Klopp had joined him and said: “We have to be honest.”

The rest of the German’s comments were not clear due to the background noise.

Robertson added as he strutted off the pitch: “F*** me, honestly.”

It was the first time Liverpool have dropped points at home all season and after the match Klopp admitted it felt like a defeat.

“We didn’t close the game and they took their moment. It feels like we lost a game, we have to look after the game better,” Klopp said.

“We were angry with the referee but we have to criticise ourselves first for not finishing the game.

“The team do it right 99 per cent of the time but I will never stop criticising them.”