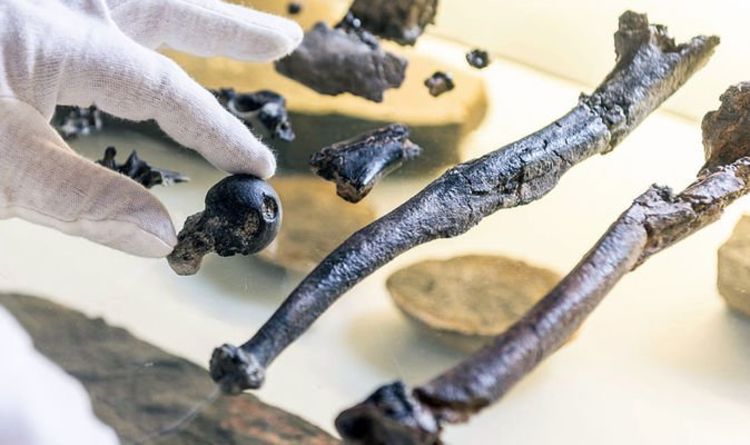 Mankind’s distinctive method of walking upright may have occurred millions of years earlier than first thought, following research on the remains of an ancient ape. Excavations from the Hammerschmiede clay pit in Bavaria, in southern Germany uncovered 12 million year-old fossilised bones belonging to a previously unknown baboon-sized ape.

The prehistoric primate lived long before our species split from their modern-day cousins, such as chimpanzees.

While the ape’s long arms, curved fingers and powerful thumbs are illustrative of life spent in the trees, its hips, knees and feet distinctively human-like and suited to walking upright.

Professor Madelaine Böhme, of the University of Tübingen, who led the study said: “It was astonishing for us to realise during the process of research how similar certain bones were to humans, as opposed to great apes.”

The most important fossils were a forearm and shin bone, which informed the scientists’ speculation about how the ape moved.

The most complete skeleton, with 21 bones belonged to the male standing 3ft (1m) tall and weighed about 30kg.

The ape boasted a broad chest and the curved, S-shaped spine seen in humans.

Examinations of the ape’s teeth placed the primate in an extinct group called the dryopithecins, which lived in Europe in the middle to late Miocene.

This epoch lasted from about 23m years ago to five million years ago.

Researchers suggests the apes were ancestors of the ancient African species who eventually gave rise to great apes more generally, including gorillas, orangutans, bonobos and mankind.

Writing in Nature, the researchers argued danuvius employed “extended limb clambering” to get around.

As opposed to swinging from tree branches or walking cautiously on branches, extended limb clambering uses both arms and legs equally.

Professor Böhme added: “The emerging picture of its locomotion is different from any known living creature.”

ByAfter a sensational tour of Asia and Oceania at the start of the year, Queen and Adam Lambert were set for a summer of...
Read more