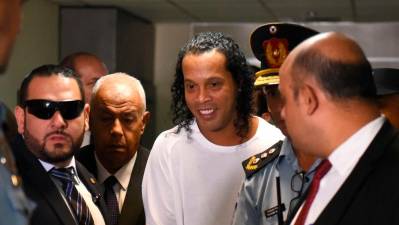 “The Attorney General’s office issued a warrant for their arrest, charged the player Ronaldinho with using a public document with false content and requested preventative detention,“ the ministry tweeted.

The two men will be held overnight at a police station.

Sources from the public prosecutor’s office told AFP that the brothers will be summoned for a hearing on Sunday to impose measures.

Ronaldinho and his brother Roberto de Assis Moreira had finished a court appearance and left the Palace of Justice Friday night at 8.15pm (2315 GMT). Ronaldinho declined to comment to reporters as they left the building.

The state attorney general decided to rectify a request for “opportunity criteria” in favor of the 2005 Ballon d’Or winner and changed prosecutors for the case. The original prosecutor, Federico Delfino, had decided Thursday not to pursue charges.

Plainclothes policemen then picked the brothers up from their hotel and drove them to the National Police headquarters, which also houses VIP prisoners and former law enforcement officers who have committed crimes.

“We don’t know under what authority they were arrested,“ their lawyer Adolfo Marin told reporters.

The brothers had been questioned for more than seven hours on Thursday by the public prosecutor in Asuncion.

Delfino said he had decided not to pursue charges against the pair, as they “contributed relevant information to the investigation” and were acting in “good faith” when they received the falsified Paraguayan documents.

Brazilian authorities withdrew Ronaldinho’s passport in November 2018 after he failed to pay a US$ 2.5 million fine for environmental damage incurred during the building of a property in Porto Alegre, in southern Brazil.

Ronaldinho, won the 2002 World Cup with Brazil, had been invited to the Paraguayan capital by a foundation for needy children, and to promote his new book.

The former two-time world player of the year and his brother were first detained on Wednesday at their hotel.

Their fake documents were detected upon arrival at the Asuncion international airport, according to Delfino.

The 39-year-old and his brother went to the prosecutor’s office Thursday morning alongside Paraguayan lawyer Adolfo Marin.

“They decided voluntarily to stay and submit themselves to the public prosecutor’s investigations,“ said Marin.

Marin added Ronaldinho had told the public prosecutor that the documents in question were given to him a month ago in Brazil.

According to the inspector leading the investigation, Ronaldinho was given a fake passport by Brazilian businessman Wilmondes Sousa Lira, who has been arrested. — AFP