Ex-Rangers goalies reflect on Henrik Lundqvist's tenure in New York: 'He was a rock star' 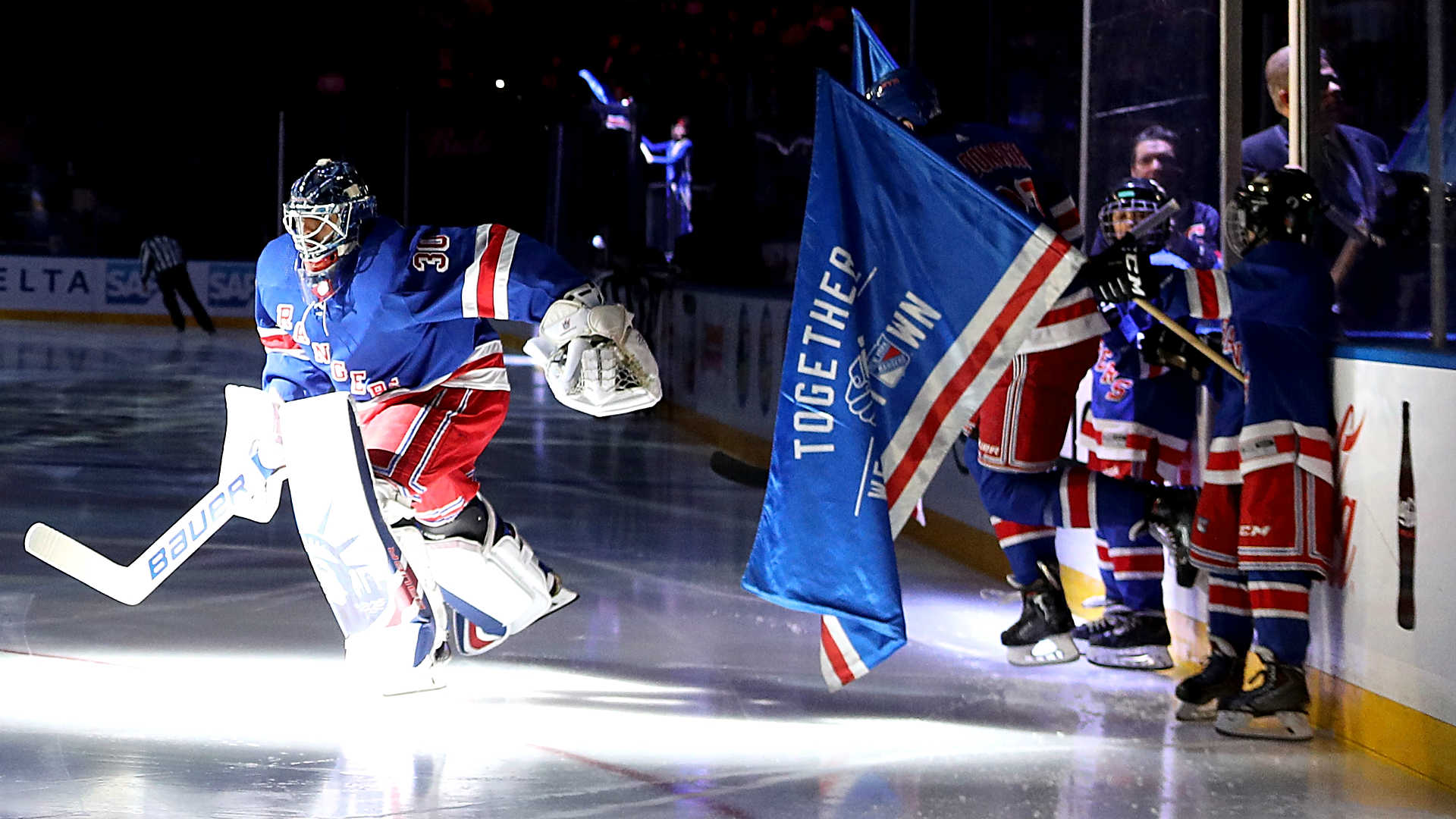 Fifteen years and a handful of days ago, the lights went up on one of the greatest productions in sports history.

Fifteen years and a handful of days ago, a kid from Sweden pulled a white jersey with “New York” stitched diagonally on the front over his chest protector before stepping onto the ice and becoming a legend.

Fifteen years and a handful of days ago, Henrik Lundqvist made his debut for the Rangers — and the rest is history.

“He was a rock star, right from the outset. It’s like he was shot out of a cannon,” recalled NHL Network analyst Kevin Weekes, who was Lundqvist’s goalie partner for his first two NHL seasons. “He was lightning in a bottle. He just took over not only the franchise or the league or the position, he just took over New York. He took it all over. He just grabbed it and the ascension, like, his takeoff, it was like a space shuttle.”

It has been 15 years minus a handful of days since that debut, but after 886 games, 459 wins (sixth-most all time) and 12 trips to the postseason, including one that ended three wins shy of a Stanley Cup, the curtain has come down on Lundqvist’s career on Broadway. On Sept. 30 — which reportedly was not a coincidence as the date honored the man who wore No. 30 — the Rangers bought out the final year of his contract.

“He was so much a perfectionist about his game and demanded so much,” said former Rangers netminder Mike Richter, whose No. 35 will surely be joined in the rafters by No. 30, in a phone chat with Sporting News. “Your goal is always the same when you play: Be your best and improve.

“He really embodied that in a way that is truly impressive and that he should be proud of it, the owners should be proud of him. That’s the type of thing that rubs off on other people in a great way and you add value to an organization outside the wins and losses and shutouts that you produce and he certainly really had that done in a large way. So, when I think of him, I just think of a true professional.”

THANK YOU FOR EVERYTHING!
15 years ago, I played my first game for @NYRangers I came here with high hopes and big dreams but in my wildest imagination, I could never have pictured the amazing ride that lay ahead.. pic.twitter.com/uo0HJMZnCj

Lundqvist’s tenure at the World’s Most Famous Arena of course had its ups and downs — from the Rangers’ first postseason appearance since 1997 when they made the playoffs in 2006, to losing in a shootout on the last day of the 2010 season to put an end to playoff dreams, to that Stanley Cup run in 2014 that came up just a tad short. There was also the vascular injury after taking a puck to his neck that cost him a large chunk of the season in 2014-15, two more Eastern Conference finals and, when he finally hung up his jersey one last time after bubble hockey, more than 50 franchise records to his name.

“The overall body of work has to be this consistent high level and he’s had that,” said Richter, the guy he not only knocked off the top spot on the Rangers’ all-time wins list but also surpassed by 158 more. “I think one of the things you have to recognize is, he made that organization better by being that professional, by [being] that demanding, by demanding so much of himself and those around him. That just makes people better and that’ll help this group and everybody who’s playing with him and working with him long after he’s gone.”

Between 2005 and 2015, Lundqvist was one of the game’s most dynamic puck-stoppers not only in the regular season but also in the big games and big moments in the playoffs. In those 10 seasons, he earned a spot in the top six of Vezina Trophy voting every single time, including being a finalist in his first three NHL seasons before winning the award given to the league’s best goaltender after a dominating 2011-12 season.

“Henrik had new skates that year and they were digging into his feet and his ankles,” recalled Martin Biron, who backed up Lundqvist from 2010 through the first few games of the 2013-14 season, recalling the sixth game of the season in Edmonton. “He came to the bench [in the third period of a 2-0 loss] and he says: ‘I can’t, I can’t stand in the net anymore. My feet are killing me. I’ve got to go,’ and then he went out the Zamboni door behind the net on the next whistle. Then I looked over to [head coach John Tortorella] and Torts goes: ‘Well, what are you waiting [for]? Go in,’ and I went in for like the last 10 minutes of the game. That was the only time all year there was a goalie change in a game.

“It’s very rare that a No. 1 goalie will come [on] in relief many times during a season but it happens often that the backup will come [on] in relief because your starter will have some off nights. He never had an off night that year, like, if he started, I could have had eight hot dogs and two cheeseburgers and a bunch of milkshakes and it wouldn’t have mattered because he was finishing the game that he was starting.”

Don’t typically do highlight mixtapes for goalies, but Henrik Lundqvist isn’t your typical goalie. A collection of some of my favourite saves of his over the years pic.twitter.com/hd9a30LjiF

For those of us who watched him from the stands or the press box and those who knew him from the locker room, Lundqvist was not only blessed with a God-given talent to stop pucks, he also worked day in and day out to perfect his craft. He epitomized the blue-collar mentality that is the lifeblood of New York City while also being debonair and rubbing elbows with the city’s elite.

“The thing about Henrik is, there was steak and the sizzle,” Weekes said during a phone interview with Sporting News. “He wasn’t just focused on all the off-ice stuff [that New York City offers] and letting in five goals at night. He was driven to be great and let his greatness drive everything else … and he never stopped.

“A lot of people got stuck on the hair wax and the hair gel and the suits and the skinny ties and everything else but that was the fashion side to him. That was the sizzle side … but it was all based on [a] hyper, hypercompetitive spirit and hyperdrive to be great and [a] commitment to excellence.”

What’s next for Lundqvist is the elephant in the room.

According to Weekes, who has spoken “to some people close to the situation,” Lundqvist has “been on the ice in the practice rink for the last little while, here in New York at the Rangers’ facility in Tarrytown.” Will the Lundqvist show hit the road? The biggest issue is the goaltending free-agent market in 2020 is flush with high-end talent — although, not many hold a candle to Lundqvist’s resume.

“Henrik is probably the best reaction goaltender I’ve ever had a chance to watch,” Biron, who thinks Lundqvist may return to Sweden to finish out his pro hockey career, said in an interview with Sporting News. “I always thought that the game slowed down [for him] to a point where, if the guy shot the puck, in his head it slowed right down that he was able to go and react with either the blocker or the glove or the leg pad and make the save.

“For me and for the majority of goalies the game doesn’t slow down and sometimes we hope it’s going to catch our shoulder or we’re lucky to react to it because maybe we anticipated well. He doesn’t cheat and he doesn’t anticipate all that much … reflexes were off the charts, and I was always amazed by that.”

While the three former Rangers netminders couldn’t agree on what will happen next (Richter said he really doesn’t know), they all concurred emphatically on one thing: Henrik Lundqvist belongs in hockey’s hallowed Hall.

ByWhile doing a solo interview, the expert suggested Meghan was able to get across her genuine passion for making a change. However, she also showed...
Read more