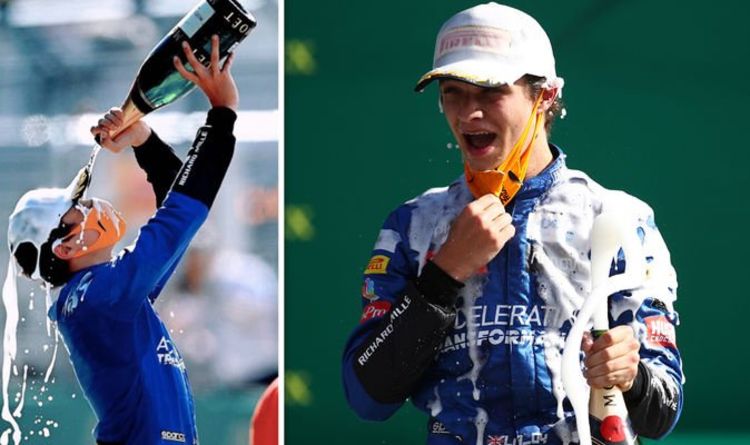 Lando Norris posted an x-rated tweet to celebrate his first ever podium in F1 after a dramatic Austrian Grand Prix finally kicked the season off. Norris was moved up to third after Lewis Hamilton was handed a time penalty for an incident with Alexander Albon, and he tweeted: “F**KKKK YEAHHHHH P3 and my first every Podium!!” and a series of smiley face emojis.

Norris, 20, had declared himself speechless straight after the race having become the third youngest driver to ever record a podium finish, after Max Verstappen and Lance Stroll.

He was brilliant in his ride to come in fourth behind winner Valtteri Bottas, Hamilton and Charles Leclerc.

And with Hamilton’s penalty confirmed Norris was almost jumping out the car as it crossed the finish line.

“I’m speechless. There were a few points in the race where I thought I’d kind of fudged it up quite a bit,” he said after the race.

“I was up to fifth with two laps to go, Carlos [Perez] was obviously getting past me but I didn’t give up and I managed to get back past Perez and I ended up on the podium!

“It was a long race but yeah I kept going, kept trying to give it my all. A pretty cool last few laps, they told me to push as much as I can, as you can tell I’m a bit out of breath.”

It marked the beginning of the F1 season with the sport having been suspended on the eve of the Australian Grand Prix back in March due to the coronavirus.

And it proved worth the wait in an action packed weekend with Hamilton looking to win a seventh title, but having to settle for seventh.

Verstappen was the first man out after this Red Bull shut down, and with the next race only seven days away they will be looking to make the necessary changes ASAP.

Norris, though, recorded the fastest lap of the race on the final lap, exploding as he was met by the chequered flag, letting out wild shrieks of joy, with some words bleeped out, over the team radio when he realised it was mission accomplished.

“There could be nothing better for the entire team, especially after this difficult period,” said McLaren principal Andreas Seidl of the team’s second podium in three races, albeit separated by seven months.

“I’m looking forward despite social distancing and masks tonight to have a small celebration at least.”