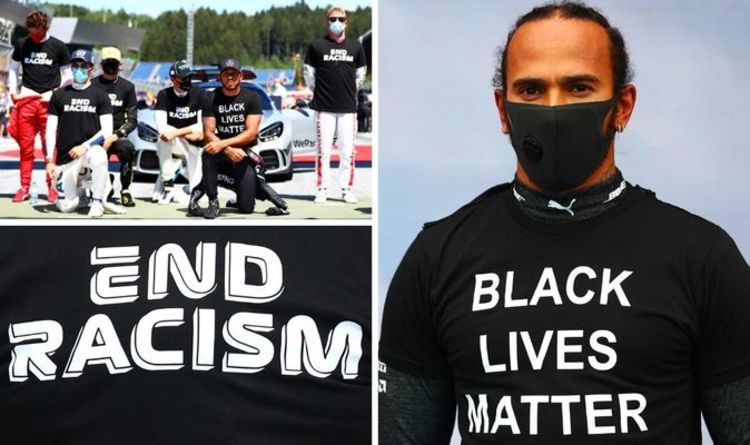 F1 and the FIA have confirmed time has been allocated before the British Grand Prix for drivers to protest against racism and show support for the NHS. Lewis Hamilton pointed the finger at F1 chiefs and the FIA for not giving the fight for equality a big enough platform following a rushed display of solidarity at last month’s Hungarian Grand Prix.

Hamilton also called out Grand Prix Drivers’ Association (GPDA) director Romain Grosjean, who he claimed was opposed to the idea of symbolically taking a knee more than once.

Hamilton and Grosjean have since held constructive talks to clear the air, while the F1 champion has prompted a decision from power-holders.

It has now been announced a ‘pre-race activity’ to support the ‘End Racism’ message will take place before the national anthem of the United Kingdom is played at Silverstone on Sunday.

A statement said: “The FIA, Formula 1, Teams and Drivers stand united as a sport in the fight to end racism and full support equality, inclusivity and equal opportunity for all.

“The FIA supports any form of individual expression in accordance with the fundamental principles of its Statutes, and as a mark of respect each driver, as an individual, may choose to mark this moment with their own gesture.”

READ MORE: How Lewis Hamilton put pressure on F1 and the FIA

At 1.52pm on Sunday, each driver will wear F1’s ‘End Racism’ t-shirt and walk to their name card on the carpet runner, with the ‘End Racism’ banner placed across the width of the track.

A video of driver pledges will play on the international feed used by Sky Sports F1 and broadcasters around the world as the drivers get into position.

The international feed will then pan to the drivers and the audio system at Silverstone will play a message of: “Formula 1 and the FIA will take this moment, in recognition of the importance of equality and equal opportunity for all”.

When the audio ends, drivers are invited to show their gesture of support, with five suggestions put forward.