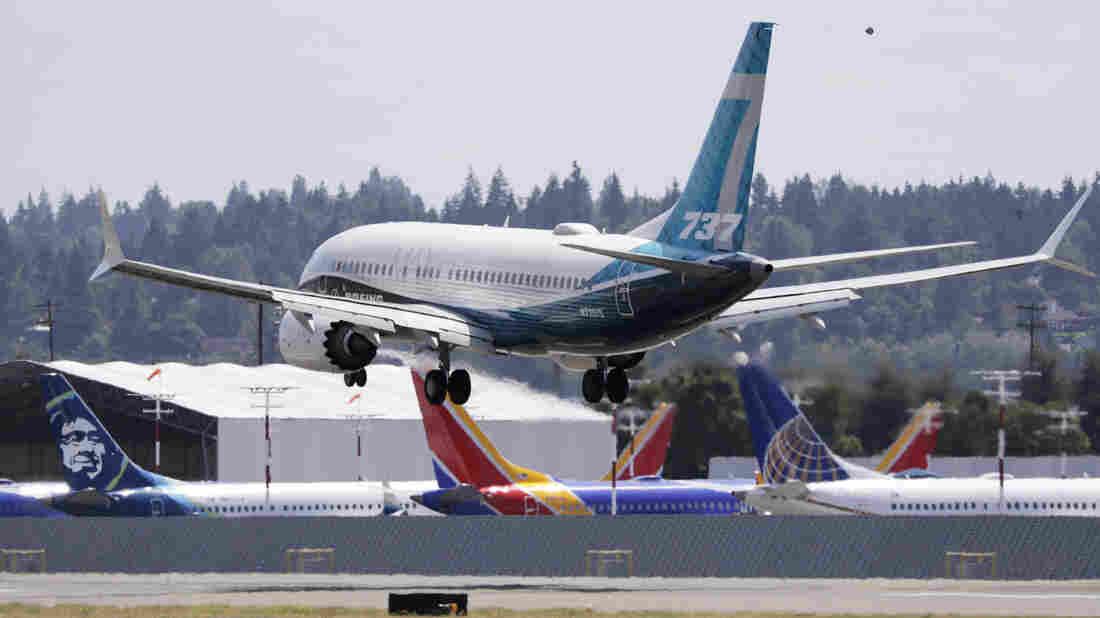 A Boeing 737 Max heads to a landing past grounded 737 Max aircraft at Boeing Field following a test flight Monday in Seattle. The jet took off from Boeing Field earlier in the day, the start of three days of re-certification test flights that mark a step toward returning the aircraft to passenger service. Elaine Thompson/AP hide caption 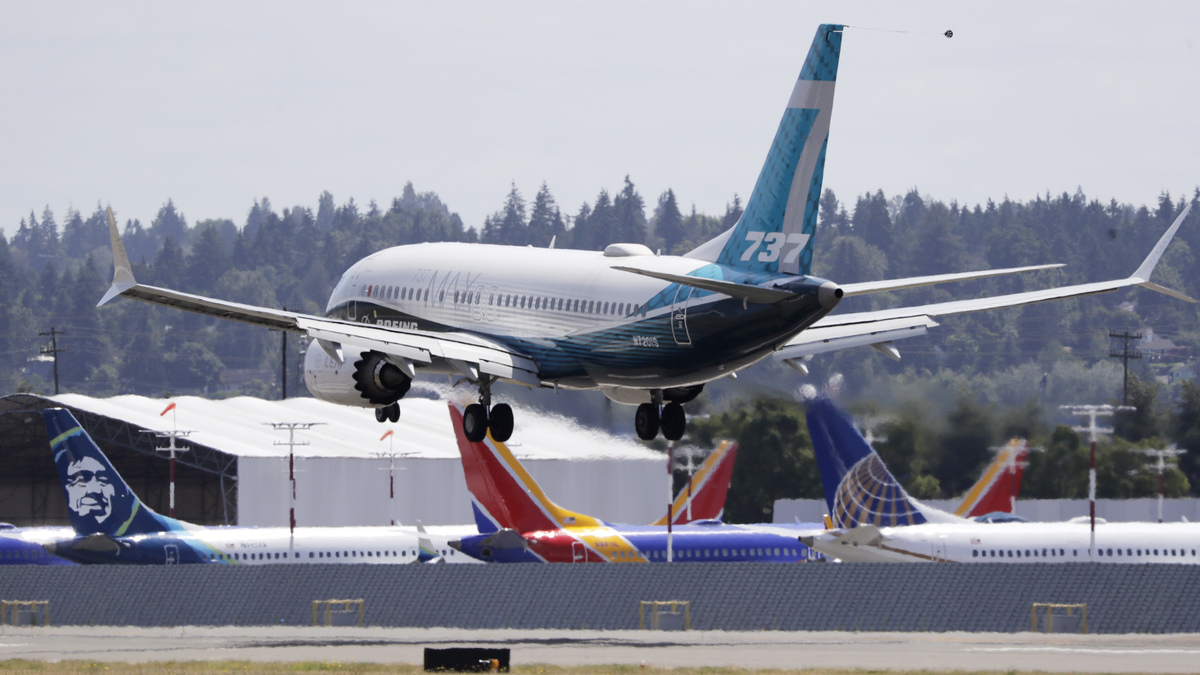 A Boeing 737 Max heads to a landing past grounded 737 Max aircraft at Boeing Field following a test flight Monday in Seattle. The jet took off from Boeing Field earlier in the day, the start of three days of re-certification test flights that mark a step toward returning the aircraft to passenger service.

More than 15 months after grounding Boeing’s 737 Max, the Federal Aviation Administration conducted the first in a series of certification test flights of the aircraft Monday, a pivotal step toward allowing the troubled plane to return to service.

The news sent Boeing’s stock soaring, as the aerospace giant’s share price climbed more than 14% on Monday. The 737 Max is the company’s best-selling commercial jet ever. Nearly 5,000 of the planes were on back-order at the time the plane was grounded last March.

But the airplane manufacturer was dealt a big setback on Monday, too, as a major European customer, Norwegian Air Shuttle, announced it is canceling orders for 97 Boeing jets, including 92 of the fuel-efficient 737 Max planes. That is renewing questions about whether airlines will still want or need the problem-plagued Max, amid a sharp drop in air travel globally because of the coronavirus pandemic.

Aviation regulators around the world grounded the 737 Max after the March 10, 2019, crash of Ethiopian Airlines Flight 302 shortly after takeoff, killing all 157 people on board. It was the second deadly crash of a 737 Max in just over four months, following the crash of Lion Air Flight 610 on October 29, 2018, killing 189 people.

Investigators found that both crashes were primarily caused by a flawed flight control system that repeatedly put the planes into nose dives that the pilots could not pull out of.

In a statement, the FAA said the agency’s pilots and engineers, working with Boeing crew members, will evaluate software changes Boeing has made to that flight control system. Over three days of test flights this week, they will be taking the plane through “a wide array of flight maneuvers and emergency procedures to assess whether the changes meet FAA certification standards.”

Once the test flights are completed, the data from the flights will be reviewed and analyzed over a period of weeks. The FAA says there are still a number of additional steps in the certification process that must be completed before the plane can be cleared to fly passengers again, including the development of new pilot training procedures. The process could still take several more months.

“While the certification flights are an important milestone, a number of key tasks remain,” the FAA said in its statement. “The FAA is following a deliberate process and will take the time it needs to thoroughly review Boeing’s work. We will lift the grounding order only after we are satisfied that the aircraft meets certification standards.”

FAA Administrator Stephen Dickson, a former Delta Air Lines pilot, has said he will not sign off on the certification of the 737 Max until he flies the plane himself.

Because the FAA had initially approved the 737 Max with its faulty flight control system, aviation authorities in Canada, Brazil, Europe and elsewhere are no longer willing to take the U.S. regulators’ word that the plane is safe, and say they will conduct their own assessments of Boeing’s fixes to the 737 Max before they will allow the plane to return to passenger service.

From the time the plane was grounded last year, Boeing often suggested its fixes for the flight control system were nearly complete and the company often predicted that re-certification of the plane was imminent. But Boeing encountered many problems and delays, with the FAA finding additional flaws in the plane that needed to be addressed.

Tensions between Boeing, the nation’s largest manufacturing exporter, and its regulator, the FAA, boiled over in December, when Dickson pushed back on the company’s aggressive timeline for certifying the plane, calling it “not realistic.” He chastised then-Boeing CEO Dennis Muilenburg for appearing to “force the FAA into taking quicker action,” and he reminded the CEO that the “FAA controls the review process.” Two weeks later, Boeing’s board of directors fired Muilenburg.

The crisis has cost Boeing billions of dollars, as the company eventually had to halt production of the plane, which caused a ripple effect of job cuts and layoffs through the company’s massive manufacturing supply chain, even before the the coronavirus pandemic led to even deeper cuts. And there are still criminal and congressional investigations into the Max crashes and the plane’s initial design and certification process.

Now, Boeing is taking backseat to the FAA, and did not publicize the certification test flight. In a statement, a company spokesman said only that “we continue to work diligently on safely returning the 737 MAX to commercial service. We defer to the FAA and global regulators on the process.”