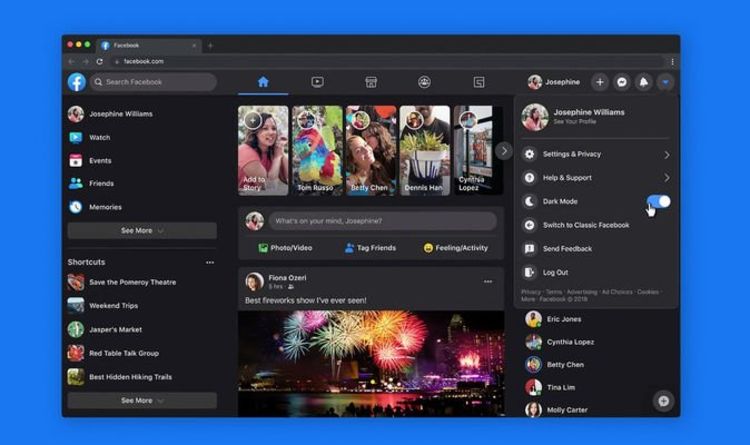 Facebook has finally flipped the switch and set its long-awaited redesign live to users across the globe. Until now, the redesigned Facebook was only available to those who specifically opted-in to the new look – and even then, the option was only available in select markets. In a new blog post, Facebook confirmed that millions of users logging into the service across the globe today will experience the new design.

Not only does Facebook look a little different, but the redesign should also prove to be faster and easier to use, the social network confirms.

And checking-in with distant relatives or spamming people with photos of your children late at night will no longer be a strain on your eyes, thanks to the arrival of a dark mode on desktop. Until now, Facebook has only offered dark mode support within its iOS and Android apps.

For those who don’t know, dark mode is designed to help your eyes by switching all the bright white elements of the user interface to pitch-black. Too much white or blue light in the evening can disturb your natural circadian rhythm and make it harder to fall asleep, research has shown.

Not only could it improve your ability to doze-off, but dark modes also boost battery life when used on a device with an OLED display. These are more common on smartphones and tablets compared to laptops. But even if the new desktop dark mode isn’t extending your laptop battery by a few hours, it looks a lot slicker than the previous design, so that’s something.

As well as the arrival of dark mode, the redesign hints at what Facebook sees as its priorities. The News Feed has an increased focus on video content, presumably because advertisements in videos are one of the biggest earners for the social network. Quick access to events and groups as well as a redesigned Messenger interface also appear in the new look.

Facebook has seen a shift in how users interact with the service. According to co-founder Mark Zuckerberg, Facebook users are increasingly moving away from sharing publicly and chatting with the comments on posts and photos – to intimate, private groups and group chats.