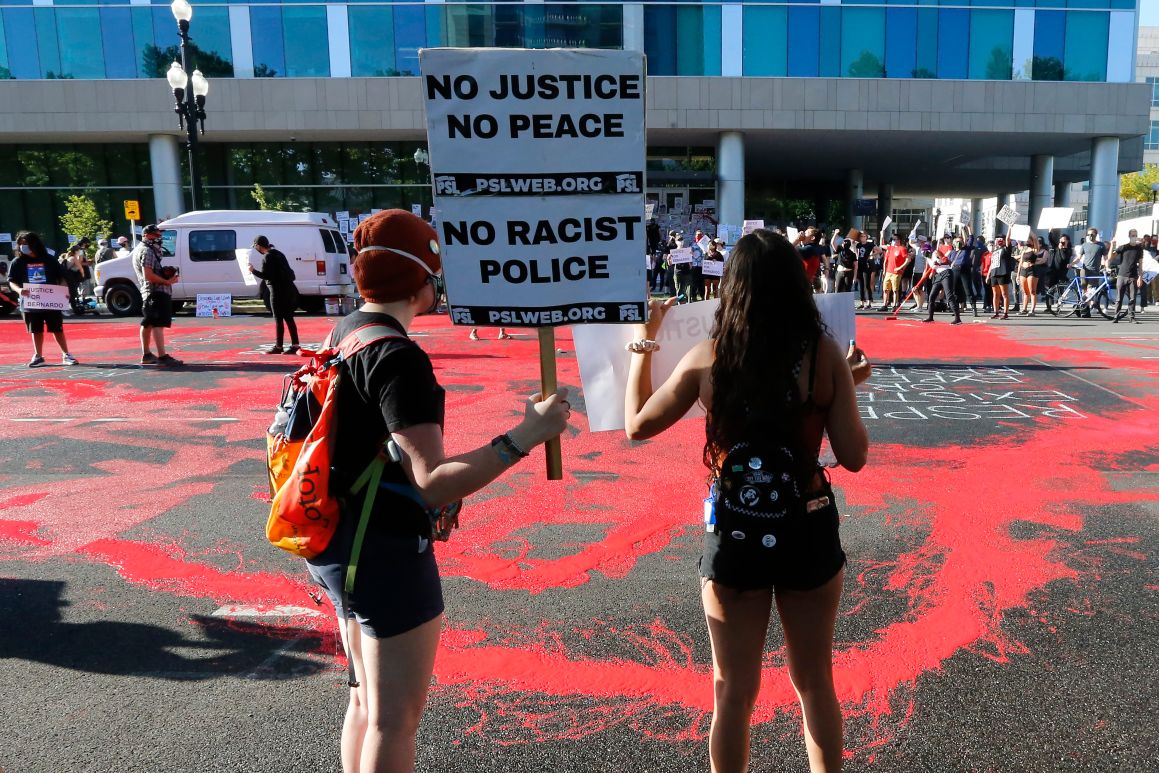 Garza and Cullors first made the #BlackLivesMatter hashtag go viral after the acquittal of Martin’s killer. Their group also owns BlackLivesMatter.com and has been an advocate of defunding the police.

“Yes, I’m trained in different economic philosophies,” Cullors said in a statement through a spokesperson, but added, “I refuse to be reduced to a single clip from an interview that was manipulated for white supremacist and right wing fear mongering.” She declined an interview.

Melina Abdullah, a Pan-African Studies professor at California State University, Los Angeles and head of BLM’s LA chapter, wrote the passage on the nuclear family that is featured on the BLMGN website. Abdullah explained that it is an “affirmation of the African principle that it takes a village to raise a child. It’s invoking the idea that all of us are responsible for our collective children.”

Republican efforts “to assail that statement actually has opened up an important conversation within the Black community,” Abdullah said. “It hasn’t had the backlash that I think that they wanted it to have.”

In a sign that the Marxism tag might already be falling flat, Giuliani took his attacks a step further Thursday, falsely accusing BLM activists of being terrorists. “These are people who hate white people,” Giuliani said on Fox News. “These are killers.”

Some Republican strategists believe that the combination of early summer riots, the controversial stances of some BLMGN members, plus the mainstreaming of “defund the police,” have given them an opening to diminish Democrats’ current electoral advantage. Democrats and BLM organizers point to the polls, describing the GOP strategy as a nakedly racist last gasp that won’t gain traction outside the right-wing echo chamber.

“The average voter in that swing suburb is not thinking about BLM as [select] leaders of the movement,” said Jefrey Pollock, president of polling firm Global Strategy Group, who works with Democrats in swing House and Senate races. “They’re thinking about the larger conversation that is happening about African Americans and racial injustice.”

At the moment, more than 60 percent of Americans support the movement, according to recent polls. And 62 percent of white people say minorities are not treated equally in the criminal justice system — up 18 points since 2014.

Voters in urban areas support the BLM movement by 73 percent, suburban voters by 62 percent and rural voters by 54 percent, according to July Navigator research done by GSG and GBAO Strategies provided to POLITICO.

One senior Republican strategist noted, however, that while support continues to be high, opposition to the BLM movement spiked 9 points in July, according to Civiqs.

Ian Prior, a Republican strategist working to unseat swing district Democrat Rep. Matt Cartwright in Scranton, Pa., acknowledged that BLM is difficult to campaign against but argued that the movement — and Democrats supporting it — has given Republicans an opening on supporting police.

“Explaining the difference between the Black Lives Matter movement versus the Black Lives Matter sentiment — there’s nuance there and nuance is hard in politics,” he said. “But support for law enforcement, that’s not nuanced and that’s where I think you’ll see a lot of the Republican messaging in tough races.”

So far, Republican candidates who are currently airing ads have mostly refrained from directly naming the BLM movement. In ads that aired from May 25 to the end of July, only one GOP ad in a primary race used the words “Black Lives Matter,” while saying that liberals don’t care about Black lives, and another used the term “violent thugs,” according to an analysis provided by Ad Analytics.

But as primaries pass — dragged out because of the pandemic — and general election races ramp up, Democrats in vulnerable seats are bracing for more Republicans to step up their attacks.

“I actually stood up in front of 1,500 people at a Black Lives Matter rally and said explicitly that I disagree with the ‘defund the police’ slogan,” Malinowksi said. “And it will not stop them from accusing me of defunding the police because that’s just the Republican talking point everywhere this year.”

Presumptive Democratic presidential nominee Joe Biden has walked a similar tightrope — embracing protesters’ urgent condemnations of racial injustice without backing some of their proposed solutions, such as calls to “defund the police.”

Asked for comment about the co-founders of BLMGM, Biden’s campaign pointed to past statements on the campaign trail when he said, “I ain’t a socialist.”