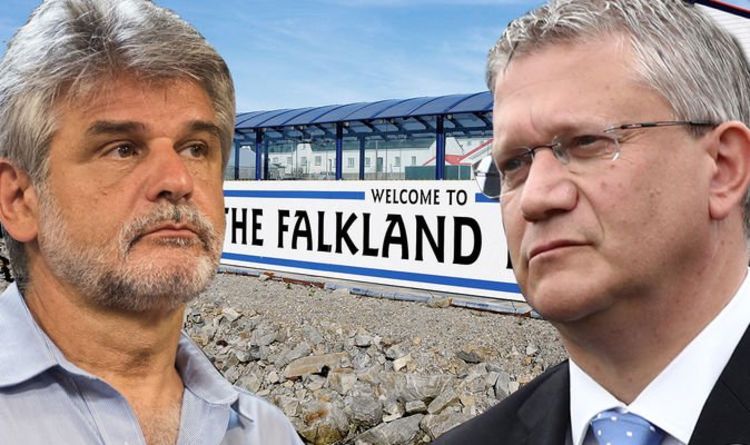 However, Tory MP Andrew Rosindell – who was chairman of the UK’s All-Party Parliamentary Group on the British Overseas Territories in the last Parliament – has warned both sides their attempts to link the issues are futile – because Britain will never agree to cede control of either territory, and voiced his “disappointment” at the Mauritian government’s apparent backing of Argentina. Daniel Filmus, secretary for the Malvinas (the name Argentina gives for the Falklands), Antarctica and South Atlantic, met with Nandcoomar Bodha, the Mauritius government’s Minister of Foreign Affairs of the African island of Mauritius, during the 36th Regular Session of the Executive Council of the African Union (AU), which is taking place in Ethiopia. Speaking after their meeting, Mr Filmus said: “We had an excellent conversation with the minister, during which we ratified the mutual support of both nations in the Malvinas and Chagos cases.

“We will continue to work together both in the United Nations and in other multilateral forums with the conviction that there is no place for colonialism in the 21st century.”

The African Union (AU) is a pan-African organisation which is heavily inspired by the European Union.

During the course of the day, Mr Filmus also met with Victor Harrison, the AU’s commissioner for Economic Affairs.

Mr Filmus said Argentina’s attendance at the summit was intended to “continue strengthening South-South cooperation and the Argentine claim for Malvinas”.

He added: “We also came to thank the support and commitment that African countries have always shown towards Argentina and the Malvinas cause.”

Romford MP Mr Rosindell told Express.co.uk he rejected any attempt to link the Falklands situation with that of the Chagos Islands.

He said: “I don’t think there is any question where we would find ourselves in a position to cede sovereignty over the Chagos Islands, which are very important strategically.

“There is just no way the UK is going to do that.

Mauritius is itself a former British colony, which has been independent since 1968.

The Chagos Archipelago consists of seven atolls with more than 1,000 individual islands, which together make up the British Indian Ocean Territory, which is itself one of 14 British Overseas Territories, along with others including Gibraltar and the Falkland Islands.

In 1965, the UK Government split the Chagos Islands from Mauritius.

The islands, which have been in British hands since 1810, were depopulated the following year, with the native Chagossians moving to Mauritius and the UK.

Diego Garcia, one of the islands, was then leased to the United States, which built a large air and naval force base.

Mauritius maintains a sovereignty claim over the islands, and in 2017, the United Nations General Assembly (UNGA) voted in favour of referring the dispute to the International Court of Justice (ICJ), with the ICJ subsequently ruling last year the UK should end its “unlawful” administration.

The Falkland Islands, which is home to roughly 3,400 people, have been in British hands since 1833.