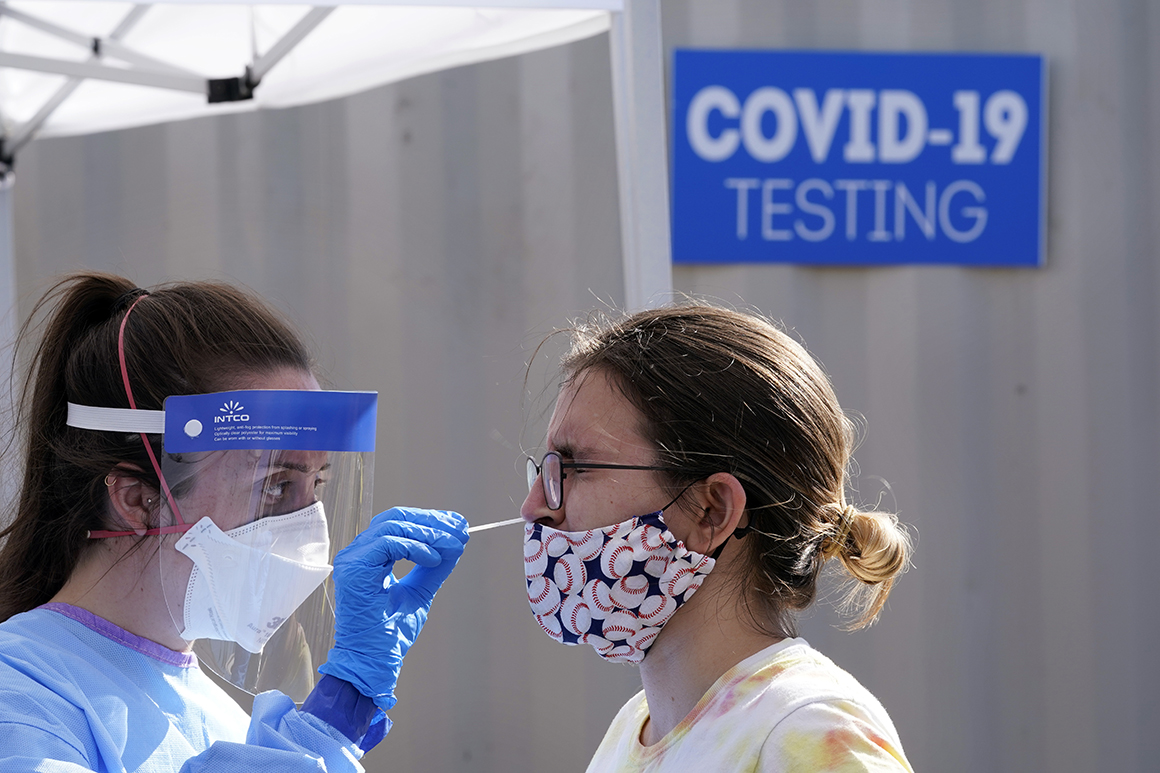 Morgan Stanley projects at least 6.5 million U.S. infections by October, and the University of Washington’s Institute for Health Metrics and Evaluation on Thursday predicted more than 260,000 people could be dead from the virus by Election Day, a 44 percent increase from current levels.

Democrats are betting that even if the coronavirus’ toll on the U.S. continues to decline, the perception of the president’s handling of the virus is already baked, and that a message that thousands of Americans needlessly died will resonate no matter the infection level come November.

Daniel Smith, a political science professor at the University of Florida, said his polls show that those who have concluded that the president fumbled the response are unlikely to be swayed by a couple of weeks’ worth of good numbers, particularly because thousands are still being infected every day.

“It’s going to be tough for a lot of folks to slide back,” he said. “We are still not out of the woods.”

Dave Wasserman, an editor at the Cook Political Report, said there isn’t evidence yet of a Trump bounce related to Covid-19, but that it’s still possible that voters will accept the pandemic’s toll and that the issue will recede along with infection rates.

Trump and his Republican allies spent the past week looking beyond the crisis, talking about it in the past tense and betting that enough people are no longer shocked by grim death totals. It’s a game plan that works best when the president stays on-script, as he did Thursday night, and avoids detours — suggesting that disinfectants or sunlight are cures, for example — that can take over the news cycle.

All the surveys show people are still frustrated they can’t return to their normal lives, said Robert Blendon, director of the Harvard Opinion Research Program.

“He wouldn’t be fighting so hard to make the schools open if he thought the [infection] numbers were enough,” he said. “It’s very measurable in people’s lives. The president can’t spin it.”

It’s a similar spot to where the president found himself in the spring, when the average number of new daily infections dropped to around 20,000 and Trump, eager to declare victory, berated governors who refused to open their economies. Vice President Mike Pence dismissed the possibility of a boomerang effect — which is exactly what happened when infections, hospitalizations and deaths skyrocketed in July.

Irwin Redlener, director of the Pandemic Resource and Response Initiative at Columbia University, said spending four days pretending the virus was gone just repeated the mistakes of the spring.

“They are being smug and opportunistic by giving a message that they have this under control, which is very far from the truth,” he said.

For now, the numbers are again breaking in the right direction. The U.S. is averaging roughly 42,000 new infections per day, down from 49,000 last week and 65,000 earlier this summer. The decline has been particularly significant in states like Arizona and Florida, two battlegrounds that could decide the election.

Even with the numbers looking better, Trump still has to convince people it’s truly safe to venture out in order to get the bounce he’s looking for — and fully rebut the charge that his mishandling of the pandemic has sunk the economy and killed Americans. That’s tough if local officials continue to limit the size of family gatherings, keep bars closed and restrict travel. Many businesses are still shuttered or having workers telecommute.

A fatigued public remains especially sensitive to school closings, as well as lockdowns of nursing homes, which keep them separated from loved ones and prohibit gatherings like weddings and big birthday parties. The staggering job losses and economic devastation from the shutdowns have also served as regular reminders that the nation hasn’t turned the corner.

“It has to recede enough that people’s lives change,” Blendon said. “If the numbers just go down 8 percent and the schools won’t open up and you’re still doing this from your bedroom, it’s a completely different issue.”

The infection numbers also don’t always tell the whole story. Recent testing rates have either plateaued or fallen, potentially deflating the case totals. And the Trump administration ordered the Centers for Disease Control and Prevention to stop promoting Covid-19 testing for most people who have been exposed to the virus but aren’t showing symptoms, which could further distort reporting.

The temporary respite from the pandemic did change public perceptions this week. A CNBC/Change Research poll showed that in six swing states — Arizona, Florida, Michigan, North Carolina, Pennsylvania and Wisconsin — the share of respondents who said they have “very serious” concerns about the coronavirus dropped to 45 percent from 49 percent two weeks earlier.

The same poll found that opinions about Trump’s handling of the response move in line with people’s sense of whether he is ensuring schools can open safely.

Pence, during his acceptance speech at the Republican National Convention, said the administration is “reopening America’s schools.” Trump on Thursday painted Democratic nominee Joe Biden as the candidate who would keep schools closed while saying that his administration is “allowing lower-risk Americans to safely return to work and school.”

But 61 percent of public K-12 schools plan to begin the year virtually and another 18 percent are employing a hybrid model, according to Dennis Roche, co-founder of the New York-based Burbio.com, which aggregates school data.

And that’s a trend heading in the wrong direction, as more schools every week announce they can’t accommodate a return to the classroom.

It’s an issue that could have an outsize effect on suburban women, who are expected to play a decisive role in the election.

“If [students] can’t go back, who is going to watch the kids,” Blendon said. “This issue is very practical.”

Meanwhile, a recent spate of outbreaks on college campuses has sickened thousands of students and faculty, forcing them to quarantine and make the last-minute switch to online learning.

The University of North Carolina at Chapel Hill was forced to end in-person instruction for undergraduates just a week after reopening, after dozens of students living in dorms and a fraternity house tested positive for the coronavirus.

“There are a lot of frustrated parents,” said Mark McClellan, who led the FDA for President George W. Bush and now directs the Duke-Margolis Center for Health Policy. “They just moved their kids into UNC and now they have to move them out because we don’t have good enough control of the virus for schools to reopen.”

Such uncertainty will factor heavily in the biggest swing state, Florida, where new daily infections are hovering around 3,300, down from almost 10,000 one month ago.

“If there is a real dip in Covid, it’s probably going to help bring some of the wavering Republicans back into the fold for Trump,” said Susan MacManus, a professor of political scientist at the University of South Florida. “If it spikes, it’s just the opposite.”

Florida Gov. Ron DeSantis, one of the president’s most reliable allies, has been looking for ways to reopen nursing homes and assisted living facilities and on Wednesday a task force his administration put together recommended allowing face-to-face visits. The recommendations would even allow visitors to enter without first being tested, a move criticized by AARP Florida.

That kind of return to normalcy — attending a wedding, visiting a grandparent — is ultimately what will convince people that the nation has turned the corner.

“The problem is people’s whole lives have been disrupted,” Harvard’s Blendon said. “If the disruption is over, the incumbent will claim credit. If it isn’t, the challenger has an advantage. All you have to do is say, ‘I’ll do better.’”

Meanwhile, if a hot water bottle isn't doing the trick, you could also try relieving your stomach pain by drinking ginger tea. Ginger has been...
Read more
Health