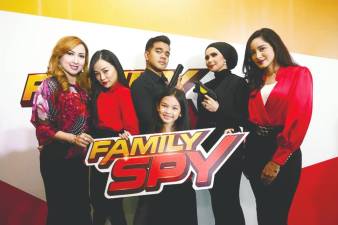 IN CONJUNCTION with the school holidays, Astro Ceria is bringing a new family-friendly series to the small screen.

The eight-episode series titled Family Spy is about an ex-spy, Roz (Rozita) who retires from crime fighting in an effort to protect her loved ones.

Her son, Daniel (Alif) is a policeman married to Indah (Nynaa), and they have a young daughter, Rin (Airiezara Jasmin).

One day, Rin is kidnapped by Roz’s long-lost enemy. Armed with her hidden crime-solving skills, Roz decides to rescue her grandchild, with the help of her old colleagues.

Filming took just 16 days. The first to sign up were Rozita and Alif, followed by the rest of the cast.

During the show’s media launch, the cast of Family Spy shared some of their experiences during filming.

Nynaa shared: “There was this one scene where I had to go crazy because I lost my daughter, and there were four levels of craziness that I had to act out! But with the help of the makeup artist, I managed to match my look with the intensity of the craziness.”

The host of Club Mickey Mouse, Charis Ow, plays Nora, one of the villains in the series.

She was able to perform her own stunts for the show’s action scenes. However, the biggest challenge for her was the language.

She said: “Previously, I did not communicate much in the Malay language.

“Therefore, when I got the script, I had to ask for help as I was not really sure of certain words, and it took me some time to get the hang of it.”