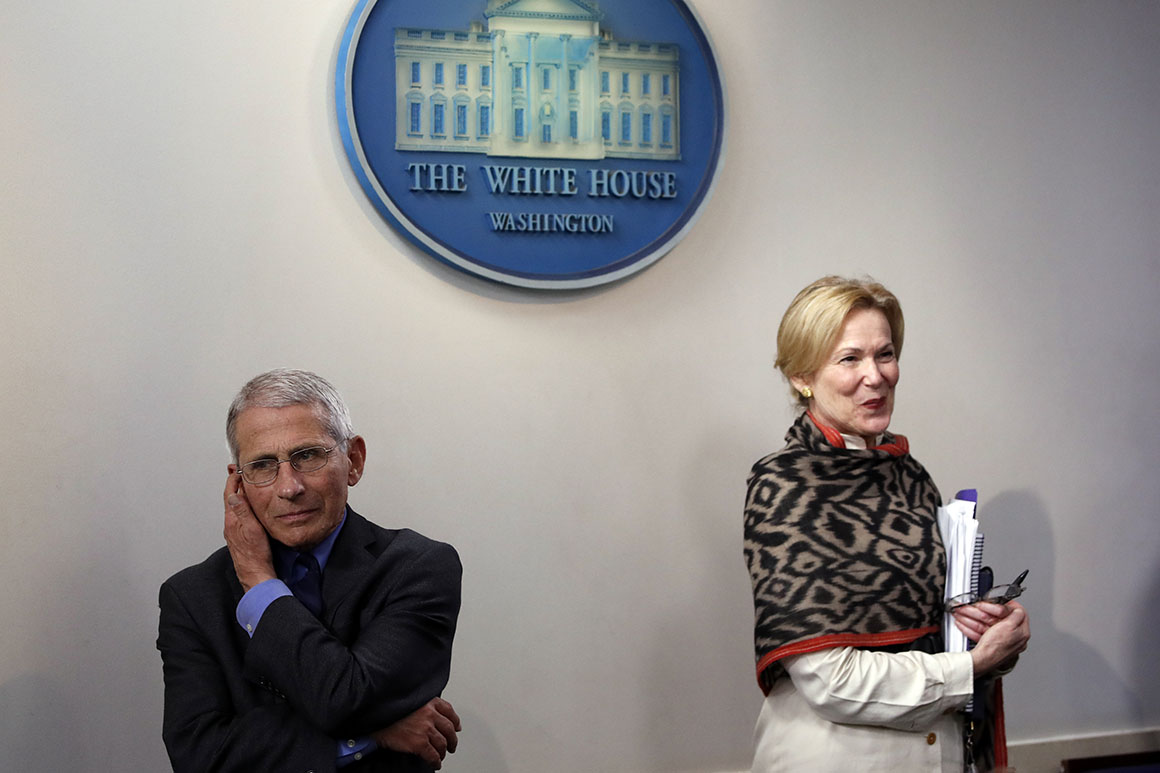 “Businesses are looking for clear, practical guidance for the best steps that they can undertake. Ideally they’d like to see as much uniformity as possible across the states,” said Neil Bradley, the chief policy officer at the U.S. Chamber of Commerce. “We want to be able to instill confidence for both employees and customers.”

The scrutiny over the White House’s public messaging has at times exasperated top administration officials, who argue there’s little they can do to satisfy the president’s detractors.

The task force’s daily briefings were dismissed as political theater and sparked debates over whether they should even be aired on television during their two month-long run, Trump allies argue. Now that press secretary Kayleigh McEnany is holding regular briefings — an event whose absence was also criticized — there is fresh clamoring for the task force to return. In the meantime, Trump himself has continued to take questions from the smaller press pool at various events, at times accompanied by Birx.

That reflects a conscious shift in the messaging strategy on the health issues — reflecting a shift in priorities for the task force itself, according to one task force official.

In addition to continued work on issues like testing and contact tracing, the task force will soon devote more of its time to the vaccine and therapeutic development front — potentially adding additional members who specialize in those efforts. Officials across the government also remain in private one-on-one contact with states, lawmakers and health providers, the official said.

“There is still very much a focus on the health side of things, and there needs to be,” the official said, pointing to an off-camera briefing for reporters Pence hosted this week that included Birx, Health and Human Services Secretary Alex Azar, Medicare chief Seema Verma and FDA Commissioner Stephen Hahn.

But those public appearances will be on an “as needed” basis, said the official, who could not say if the task force would resume any regular briefing schedule — or if a federal health agency like the Centers for Disease Control would eventually take over as the face of the public health response. Public health experts have urged the administration to put the CDC in charge of the response for months, arguing it would help de-politicize the response.

In response to questions about health agencies’ role in the pandemic response, an HHS spokesperson said “department leadership and scientific and public health experts across HHS have been and will continue to be transparent and actively communicating with the American people.”

While Birx appeared on “Fox News Sunday” last week, neither she nor Fauci were scheduled for Sunday-morning interviews this week.

Meanwhile, many public health experts contend that the administration has been putting its political priorities ahead of crucial health information — hampering the response at nearly every turn.

Over just the last couple weeks, for example, the rush onto the market of dozens of different coronavirus antibody tests generated bewilderment over how accurate they were — and what exactly states and businesses should use them for.

Hospitals that cheered the announcement of the first proven Covid-19 treatment quickly grew frustrated over an initial distribution process that was kept largely secret and ultimately ended up botched. It wasn’t until a wave of press reports on the problem — including that Pence directed Azar to take more responsibility — that HHS released details on its distribution plans.

Much-anticipated CDC guidelines advising businesses and schools how they should reopen, meanwhile, remain in limbo, prompting many companies to seek out other sources in the meantime for assistance on how to operate through an unprecedented crisis.

“[Businesses] want specific guidance, and they’re asking all the time for universities to give it to them — for someone to give it to them,” said Sharfstein, who added he’s been doing regular webinars on the issue for businesses. “The uncertainty is maddening to them, and when they hear conflicting messages, it amplifies the uncertainty.”

Gone, too, is much of the administration’s transparency with Congress, where top health officials trekked to Capitol Hill throughout the crisis’ early days to brief lawmakers regularly on the response effort. That practice — which won high marks from Republicans and even many Democrats — has since devolved into mass conference calls where House and Senate members alike crowd onto the line, only to come away with few new answers.

“They’ll say, we don’t have the answer, we’ll get back to your office — and then they won’t get back to our office,” said Rep. Kim Schrier, a Washington Democrat and the only female physician in Congress.

The experience has underscored the need for the administration’s health experts to testify at congressional hearings, she added, though the White House is now tightly controlling who is allowed to show up and where. Trump has already blocked Fauci from testifying in front of the House and indicated he would do the same with Azar and Verma — calling the chamber “a bunch of Trump haters.”

“I think it is critically important that we get Fauci and Birx out front,” Schrier said, lamenting that Democrats scattered throughout the country face simple logistical difficulties in countering Trump daily musings and elevating public health recommendations. “What he is setting up is a sense in the public that it is an either/or: that it’s either you save the economy or you address the public health part — and he is prioritizing the economy.”

In reality, the public health community is sounding perhaps its loudest alarms to date that the nation is careening toward a future that includes neither a saved economy nor a healthy populace.

Cases are still climbing in many of the states that plan to gradually reopen over the coming weeks, raising the prospect not of an eventual second wave of coronavirus outbreaks, but of a current first wave that never crests — killing thousands per day well into the late summer months.

“I don’t know if we’re going to have a lot of great surveillance to figure out what is working and what is not working. I think we’re going to be feeling around in the dark,” said David Hutton, a public health professor at the University of Michigan. “We don’t really know if this is seasonal or not and whether the warmer summer weather will save us.”

Yet the administration has sought to move quickly past those lingering concerns, signaling publicly and privately that states will be handed much of the responsibility for the on-the-ground health response while the federal attention shifts more to the economic crisis.

After an internal model projecting deaths could reach 3,000 per day by June 1 was published by The New York Times, administration officials were promptly warned not to share such documents, said one official who received the notice. The White House and Johns Hopkins University, which helped develop the chart, subsequently dismissed the chart as unvetted and unofficial.

Asked earlier this week about concerns that health and emergency officials voiced privately about ongoing equipment shortages, an HHS spokesperson cast the federal government as playing a backup role, characterizing the response as “locally executed, state managed and federally supported.”

The CDC — which has led efforts to beat back prior outbreaks like Ebola and Zika — has been largely absent from public view since mid-March, when its regular press briefings were abruptly halted. And even as Trump vowed to keep the task force active, he insisted much of the next few months will fall to the states to figure out.

“I’m relying on the governors, and the governors are the ones that are doing that, and if I see something wrong I will clamp down on it very hard and very strongly,” Trump said Friday. “They know what to do, and they know what they’re doing. And we’re going to see.”