FBM KLCI down 4.2%, RM91 billion in market value wiped out after a week’s rollercoaster ride 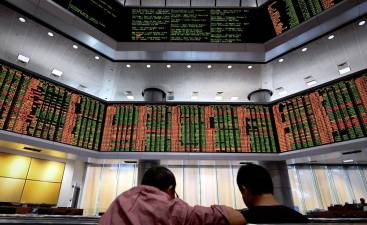 PETALING JAYA: A “rollercoaster ride” is most apt to describe what the local stock market went through in the past one week, with the FBM KLCI nosediving 64.26 points or 4.2% from the resignation of Tun Mahathir Mohamad as prime minister to the appointment of Tan Sri Muhyiddin Yassin as Malaysia’s eighth premier.

The collapse of the Pakatan Harapan government, the formation of the new ruling coalition Perikatan Nasional coupled with the worsening of the Covid-19 outbreak wiped out a total of RM91.37 billion in market capitalisation during the past six trading days.

A selloff was once again seen on Bursa Malaysia today in response to the change of government as the local political landscape remains uncertain with Pakatan Harapan planning to table a no-confidence vote against Muhyiddin in Parliament.

Muhyiddin-linked stocks Eden Inc Bhd and Thriven Global Bhd saw a surge in investor interest, rising 38.5% and 43.2% to 7.5 sen and 9.5 sen. Both stock were among the most actively traded stocks with 205.17 million and 69.61 million shares changing hands.

As PAS is part of the new coalition now, sin stocks such as Carlsberg Brewery Malaysia Bhd and Heineken Malaysia Bhd were the top losers, down 9.3% and 9.8% to RM28.88 and RM23, respectively.

Given the sudden change in government, CGS CIMB Research said, the equity market is expected to stay volatile due to short-term policy uncertainties.

“In view of these concerns, coupled with uncertainty caused by Covid-19, earnings risks, sharp drops in global markets over the past week and foreign selling, there could be near-term downside risks to the KLCI,” it said.

The research house is recommending investors go for export-oriented, oil and gas, healthcare and utilities sectors, which are the least affected by the change in government.

Sectors affected by domestic policies include the bank, consumer, construction and property sectors.

“Investors could reduce exposure to sin sectors on concerns of potentially stricter measures imposed on these activities as Islamic party PAS is part of the new coalition government. Stocks with high foreign shareholding may also be subject to selling pressure due to uncertainty,” it added.

In terms of growth prospects, CGS CIMB said investors are expected to express their risk aversion in the immediate term through a weaker ringgit, higher bond yields and a sell-down in risk assets.

“If the ruling coalition can fashion a solid majority coalition bloc soon, policy clarity may resurface and temper downside risks to the growth outlook. In the face of significant uncertainty, we expect the dovish bias in monetary policy to strengthen and for BNM to reduce the OPR by 25 basis points on March 3,” it said, referring to Bank Negara Malaysia and its Overnight Policy Rate.

- Advertisement -
- Advertisement -
Facebook
Twitter
Pinterest
WhatsApp
Linkedin
ReddIt
Email
Tumblr
VK
Previous articleVitamin D deficiency: The sign in your weight that could signal you lack the vitamin
Next articlePhillip Schofield loses it with This Morning viewer as he goes to punch screen: 'Say it!'

ByAllison Swan Taylor Swift celebrated her six Grammy nominations — including one for Album of the Year for her latest record, ‘Folklore’ — with a glass of red...
Read more