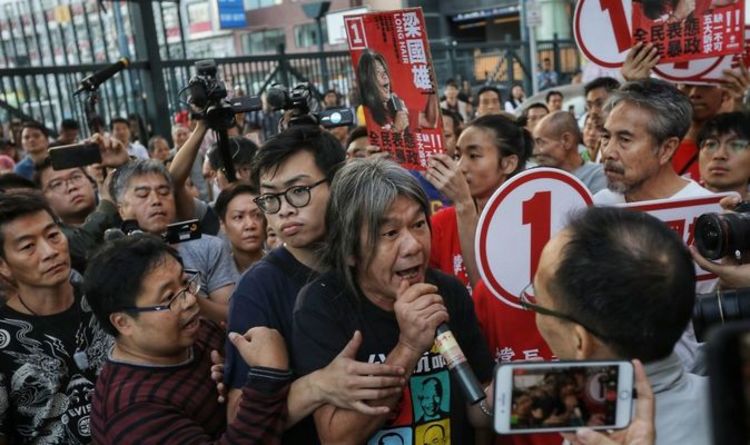 Protests broke out last year over a bill that potentially allowed people in Hong Kong to be extradited to mainland China, which critics viewed as an erosion of the city’s legal autonomy which would put Hong Kongers at the risk of political persecution from mainland authorities. The movement then became about the wider topic of democratic freedoms. Despite China agreeing to allow ‘one person, one vote’ in elections for the city Chief Executive, the position is elected by a 2,000 member committee widely considered to be pro-Beijing.
Those arrested include Martin Lee, often touted as the godfather of Hong Kong democracy.

Last week, Mr Leung was injured while he protested outside Beijing’s liaison office in Hong Kong.

Nicknamed ‘Long Hair’, according to South China Morning Post, Mr Leung was stabbed in the waist.

An 81-year-old retiree was arrested at the scene and was recording saying; “[Leung] is a bad guy, why meddle with the liaison office? I’m Chinese!”

Mr Leung told South China Morning Post: “I was doing an interview with a member of the foreign press, when I felt I was stabbed from behind and felt pain.

“I saw [the assailant] holding a metal object, and he was shouting abuse at me, saying I was ‘creating trouble’.”

On Mr Leung and the other activists’ arrest, police said the case had been bought up for criminal proceedings but declined to give details.

Democratic Party chairman Wu Chi Wai told The Straits Times: “The timing is too much of a coincidence. In the past week, the liaison office, the Hong Kong and Macau Affairs Office, officials and political veterans have criticised us and warned us about national security issues.”

Earlier this week, the chief of the liaison office, Luo Huining reiterated calls for national security legislation to combat what Beijing characterises as radical violence, foreign interference and pro-independence voices.

Regina Ip, a member of the Hong Kong Executive Council, accused the pro-democrats of overreacting.

Ms Ip said everyone is equal before the law: “Whether you are a celebrity, media boss, lawmaker or former lawmaker, there is no privilege or immunity.”

In September, the city will see LegCo elections for the first time since 2016.

It will be the first city-wide elections since the District Council elections last year.

Before the vote, pro-Beijing councillors controlled all but one council, Sham Shui Po, which had no overall control.

A total of 331 seats across the 18 councils were held by pro-Beijing candidates, and 124 by pro-democracy politicians.

Now, the figure is 388 for pro-democracy and just 89 for pro-Beijing.