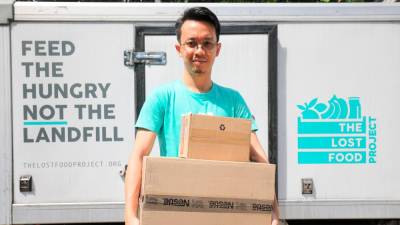 WHEN Suzanne Mooney moved to Malaysia from the United Kingdom in 2014, she became involved in charity work. She was struck by the food insecurity experienced by the less fortunate.

With that in mind, Mooney created The Lost Food Project in 2015 to bridge the hunger gap, whilst also reducing food wastage. She and her dedicated team of volunteers collected boxes of surplus groceries from supermarkets and food manufacturers.

These groceries were then given to established charity organisations, and provided nutritious food to thousands of vulnerable persons.

In 2018, Mooney left Malaysia when her husband was posted to Zurich. However, the volunteers have carried on with the project.

The NGO is still thriving today. Over the span of five years, it has served more than four million meals.

“Today, we are contributing to at least 56 charities from orphanages to refugee and homeless [shelters], as well as thousands of B40 communities from PPR and low cost housing units,” says Mohd Syazwan Mokhtar, who is the general manager of the project.

“Some of these people cannot afford [to have] a meal a day,” he says.

He remembers that the first supermarket to contribute to the project was Jasons Food Hall in Bangsar. Today, The Lost Food project has at least 10 to 15 organisations that contribute regularly.

Indirectly, the project is also addressing the issue of waste in the Malaysian food industry.

“This is enough to feed two million people every day,” Syazwan says.

“No-one in Malaysia should suffer from hunger.”

Volunteers currently ‘rescue’ an average of 10-12 tonnes of food from going to landfills each week. This is just 1% of the food being thrown away on a regular basis, but the group has plans to increase this number in future.

In 2017, the project achieved another milestone after striking a deal with Dewan Bandaraya Kuala Lumpur (DBKL) and vendors from Pasar Borong Kuala Lumpur to pick up surplus vegetables and donate them to those in need.

“We do this three times a week,” Syazwan says.

The project was initially focused on the Klang Valley, but recently expanded operations to Johor Baru. In future, volunteers are hoping to continue their work all over Malaysia.

“To make this dream a reality, we will need greater funding and more volunteers from [other] states,” Syazwan says.

The team also makes the effort to be transparent with all the parties they deal with. They have proper agreements signed between manufacturers and the charity organisations that they supply the food to.

“We also send reports if the manufacturer requires them,” he says.

The last thing they want is for any of their working partners to have doubts about their mission.

They also have an education arm where they go to primary and secondary schools, as well as colleges and universities to give lectures on food waste.

“Young [people] should be aware of food waste here in Malaysia, and be part of the solution,” he says.

He is also proud of efforts by some of the project’s partners to encourage urban farming.

“Some of the charity organisations we have donated to have been planting vegetables in their yards,” he says.

They are also looking into the future possibilities of urban farming as one of the ways to reduce hunger in Malaysia.

Syazwan pointed out that France recently became the first country to ban supermarkets from throwing away and destroying unsold food, instead encouraging them to donate their unsold produce and food items to food banks and charity organisations.

“I’d love to see a similar policy being practised in Malaysia,” he says.

This project has been winning several prestigious awards over the past few years, including the Best Social Impact award at the Europa Awards for Sustainability, last year.

The group’s motto – Feed the Hungry, Not The Landfill – is written across its three trucks which pick up groceries from donors. Indeed, they are living up to their motto.