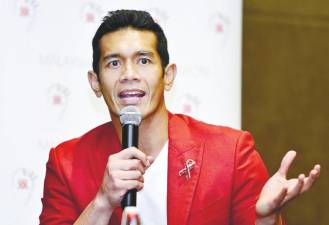 IT takes a lot of commitment to support a social cause for over a decade, but that is exactly what actor and emcee Fahrin Ahmad has been doing ever since he was approached by the Malaysian AIDS Council (MAC) in 2008 to join their new celebrity endorsement programme which eventually became the Red Ribbon Celebrity Supporters (RRCS).

He was among the first batch of RRCS, along with Datuk Seri Siti Nurhaliza, Faizal Tahir and Datin Paduka Umie Aida.

“As an RRCS – we were given the basic task of dispelling stigma and discrimination against those living with HIV,” said Fahrin. “From there, my love affair with AIDS activism grew. It opened my eyes about my own ignorance, and the prejudice that I used to harbour against the HIV community.

“Now it is approaching 12 years that I have been involved with the cause. The people I have met and whose stories I shared have certainly changed my perspective of the community a lot from what I thought back then.”

Describing himself as a reasonably educated person who attended law school and who grew up in an urban household, Fahrin was surprised at how much he was in the dark when it came to HIV or AIDS.

“I am not blaming anyone though, because pursuit of knowledge is a personal journey, and it is you who must find ways to enlighten yourself.

Now, I often find myself very eagerly wanting to impart knowledge about HIV/AIDS – to immediate family members, friends and fans. I made HIV activism a big part of my professional career too.

“In the past 12 years I have been with MAC, I have met many wonderful people living with HIV. Some decided to spend their entire life helping others, and have become deeply involved in the NGO world.

“I have also met people who have survived unimaginable suffering and injustice because of stigma and discrimination. But I think, for the most part, all they ever hoped and wanted was to go on with their lives, just like any other normal person.

“I must also point out that misinformation about HIV used to be quite prevalent in the entertainment industry. Silver screen depictions of a person living with HIV were often very negative. In the TV universe, if you had HIV you must be a sinner; or lying wasted, facing eventual death.

“Unknowingly, many film directors were perpetuating stigma and discrimination, with devastating impact on the HIV community. Whenever I have the chance, I will always try to right the wrong, and try to get people to be compassionate and kinder to the community.”

Fahrin points out that no one is immune to HIV.

“HIV can be found in the average household, among those whom you least expect. I have met housewives who were infected by husbands, sexual assault victims, children born with the virus from their mothers.

“Of course, HIV infection rates are also disproportionately high among [these groups], and to drive them away with labels and persecution will only make matters worse. We are not going to eliminate the epidemic by taking the high ground.

“I am a firm believer in second chances, there’s always time to become a better person even when you think your whole world seems to be crashing down.

“I have met former drug users living with HIV who became life coaches to help their community get back on track, and even former sex workers who were single mothers trying to make a living for their children. To err is human, and who are we to pass judgement over people? I believe all religions teach us to be kind to one another, and to treat people fairly.”

Fahrin recently helped the Malaysian AIDS Foundation raise funds through the RM1 Smile Hero Campaign, teaching how even a RM1 donation can make a difference.

“It may not seem like a lot but multiplied by millions of people, it can create wonders. This campaign is to ensure that access to HIV treatment remains uninterrupted during the Covid-19 pandemic.

“For people living with HIV, this is definitely a matter of life or death. If they are not on treatment, they may not be strong enough to survive the onslaught of Covid-19.”