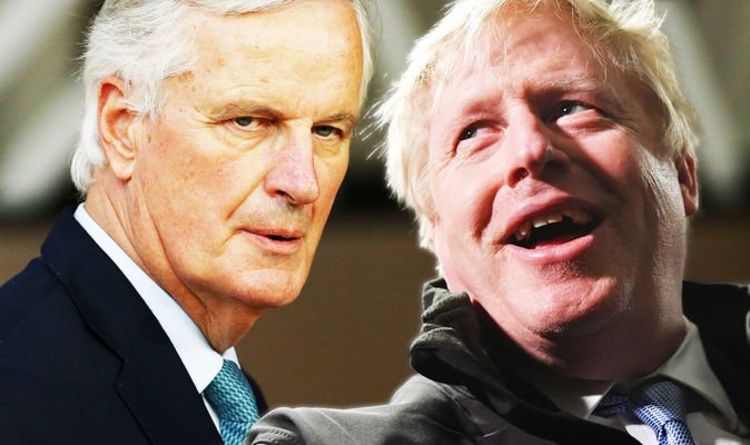 Before Brexit negotiations have taken place both parties have clashed over how the trade agreement will be formulated. Ahead of the talks, a source for the UK’s negotiating team, Taskforce Europe claimed the EU “seem divided”. With that in mind, we asked Express readers, ‘Does the UK have the upper hand on Brussels now the EU27 are ‘divided’?’

In overwhelming fashion, 2,850 (85 percent) out of 3,335 insisted the UK does have the “upper hand” in the upcoming negotiations.

Commenting on the poll one user said: “We have always had the upper hand, it’s only the Remainers and the EU policy bureau that were having naive misconceptions.

“The 17.4 million knew what we were voting for.

“A better future run by a sovereign UK Parliament.”

Another said: “Yes we have the upper hand and Johnson needs to stand up to them and not take any more bullying.”

A third also agreed: “The UK always has had the upper hand because the EU needs us more than we need them.”

Another user also insisted the UK should push for a no deal Brexit while we still can.

Mr Johnson will take personal charge of the 40 person team.

Termed as “small and agile” a source told the MailOnline progress on the negotiating position within the group has been “smooth”.

In contrast, the source stated the EU seemed “divided and distracted”.

The source added: “By contrast, the EU seem divided, distracted by other issues like marbles, instead of the important decisions on what our trading relationship will actually look like.

“The new plan is for them to approve their mandate on February 25 but it’s anyone’s guess whether they will.”

Last week, the issue of the Elgin Marbles was brought to light after a draft text from the bloc was leaked.

The draft text showed the EU will attempt to repatriate the marbles to Greece within a trade deal.

ByHealth Secretary Matt Hancock Hancock has outlined which of the three toughened tiers, ranging from the lowest at Tier 1 to the highest at...
Read more
U.K.