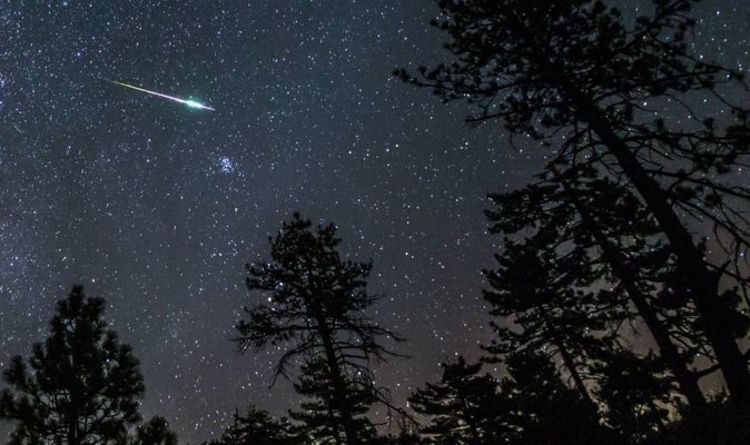 A meteor which entered the Earth’s atmosphere was so bright it could be seen over a plethora of countries. Residents of southern England, the Netherlands, France, Belgium and Luxembourg were treated to the stunning phenomenon. More than 100 people reported the sighting to the International Meteor Organisation (IMO) as the fireball rained down on the evening of October 11.

Witnesses described seeing a bright streak of light booming through the clouds.

According to the IMO, the meteor entered the atmosphere above the Bay of Biscay, to the west of the French coast.

One person, Teri, told the IMO: “We have seen shooting stars before, but this was completely different. It was much larger and brighter it was coming almost straight down.”

James added: “Something very irregular to see down the south coast of England.”

Dean described it as the “best and biggest I’ve ever seen!”

As with all fireballs, the meteor would have petered out and disintegrated before it reached the surface.

Fireballs occur when a meteor or another space rock hits the atmosphere. Air seeps into the pores of the rock, pushing it apart and causing it to explode.

The IMO said: “Fireballs are meteors that appear brighter than normal. Due to the velocity at which they strike the Earth’s atmosphere, fragments larger than one millimetre have the capability to produce a bright flash as they streak through the heavens above.

“These bright meteors are what we call fireballs and they often strike fear and awe for those who witness them.”

Perhaps one of the most famous fireballs to hit Earth came in 2013 when a meteor exploded over Chelyabinsk, Russia.

READ MORE: Meteor shower tonight: What is the best time to see the Draconids?

The blast was caused by a 20-metre meteor which caused such an explosion which caused over £25.3million (€30million) in damages to the small Russian city.

In 1908, a small asteroid surprised Earth when it exploded over Siberia’s Tunguska, flattening woodlands across 800 miles.

Neither of the aforementioned space rocks had been spotted before their approach past our planet, leading to fears Earth could be surprised by a more devastating asteroid strike in the future.

Jonti Horner, Professor of astrophysics at the University of Southern Queensland, says there is still a huge risk we could be destroyed by asteroids.

In an article for the Conversation, Professor Horner wrote: “The Solar system is littered with material left over from the formation of the planets. Most of it is locked up in stable reservoirs – the Asteroid belt, the Edgeworth-Kuiper belt and the Oort cloud – far from Earth.