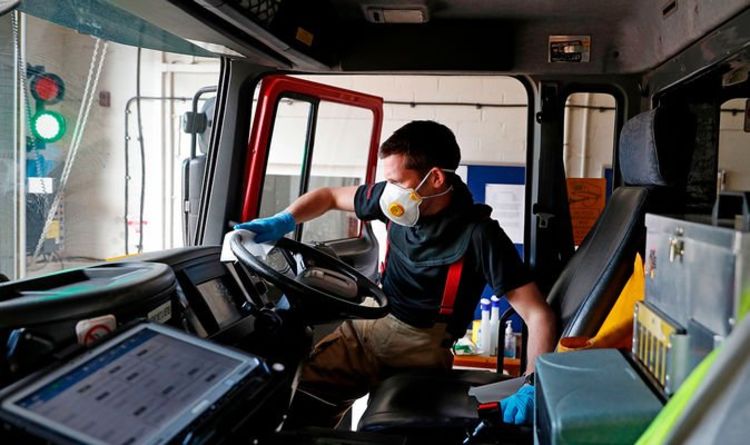 The Fire Brigades Union has said that nearly 3,000 fire and rescue staff are currently in isolation, as members have spoken out that they have not had access to vital tests. Government has been called on to urgently provide testing kits, as the peak of the pandemic was estimated by England’s Chief Medical Officer Chris Whitty to occur during the May half-term.

An anonymous firefighter spoke exclusively to Express.co.uk about the lack of steps to ensure emergency responders safety.

He revealed that it took almost a month for his team to socially distance as they continue to work in close proximity of each other.

He said: “For the first three weeks nothing changed, we all just washed our hands more and had to really disinfect our face masks.

“Last week an official statement was sent to everyone saying we needed to social distance and move our chairs in the station to be 2m apart, tie doors open, wear gloves for everything.

“Which after being in everyone’s company for the past three weeks was laughable as a new precaution.”

It comes as the union has warned that without urgent testing there will be an “inevitable” attack on fire brigades ability to respond to emergencies.

Firefighters are keen to still continue working and be on hand to help the most vulnerable in society.

The anonymous source said: “No one that I’m aware of would hide away from that danger or allow that fact to stop them doing the job we love doing.”

Training firefighters to drive ambulances will mean more can be on the road to deal with the current pandemic.

Firefighters have been paired with paramedics to help drive the vehicles as they have relevant emergency response experience, and know-how to expertly deal with traumatic situations.

Simon King from East of England Ambulance Service said new recruits were needed as traditional staffing was “never going to be enough” during a time of the pandemic.

They will now fit masks and respirators for NHS staff and help to deliver protective equipment also.

England has been slammed as the only nation of the UK to not provide a commitment to test its emergency responders for symptoms of coronavirus.

In Northern Ireland 50 firefighters with symptoms have been tested, there are also programmes in Wales and Scotland.

ByEngland's chief medical officer, Chris Whitty, told the same briefing the government was trying to ensure the measures to control the virus were the...
Read more
U.K.

Lockdown postcode checker: What tier am I in? How can I check?

BySir Keir reinstated the former leader back to the party but decided to withhold the whip until he apologises for comments made in regards...
Read more
U.K.

By"It's not against the law - and that's the whole point. You can do it within the rules that are there, but it does...
Read more
U.K.

Covid POLL: Are you planning on a big family Christmas this year? VOTE

ByBoris Johnson has urged people to "think carefully" after it was confirmed that three households will be able to form a Christmas "bubble" from...
Read more