The frozen desert is home to around 1,000 scientists carrying out research projects around the year to learn more about the effects of climate change and also probe the history of the planet. One team in particular, the American Search for Meteorites (ANSMET), have a particular interest in finding and locating space rocks that have landed on the barren landscape in the past, to study their composition. In 1984, ANSMET stumbled across a bizarre green rock while surveying the area near Allan Hills and immediately sent it back to NASA, who found that the meteorite – dubbed ALH84001 – originated from Mars.

The rock was put into storage for more than a decade, but the Science Channels ‘NASA’s Unexplained files’ revealed how the events unfolded.

The narrator said in 2014: “The team had never seen a rock like this before – they tag it, bag it and send it to NASA for analysis.

“The rock is old, very old, and it looks different because it’s not of this world. 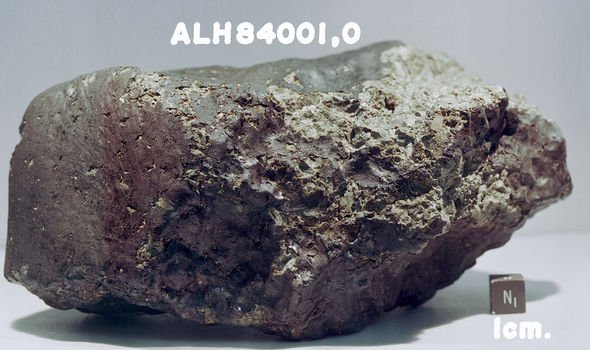 
“What they have in front of them is an ancient piece of Martian rock, a time-capsule from another planet.”

Meteor specialist Professor Laurence Garvie, who works with the space agency, explained why the discovery was huge for understanding the history of space.

He said: “These meteors are like little books, you open them up and inside we as scientists can read that book by looking at the chemistry and the structure.

“We can understand its early history.”

The narrator went on to detail how the discovery suggested there was once water on the Red Planet – a vital component for life.

He added: “16 million years ago, a massive meteorite smashes into ancient Mars.

“Planetary debris spirals into space and crash-lands on Earth.

“Now this five-pound chunk of rock has become a window into a time when Mars had oceans just like Earth, but astonishingly, NASA halts the study and locks the rock away.

“Its secrets remain hidden until nine years later when another research team decides to revisit it.”

But, when scientists took a closer look in 1996, they found something even more remarkable hidden inside the rock. 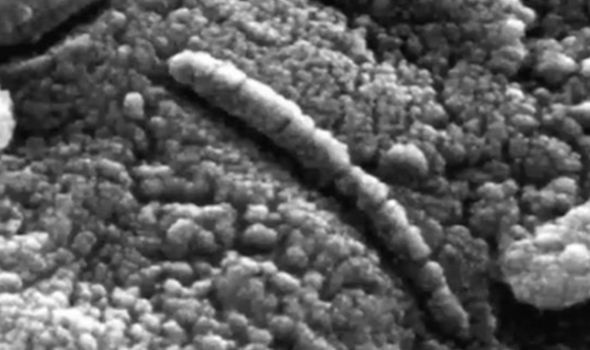 The strange worm-like creature was inside (Image: WIKI)

The narrator added: “Believing its composition might help explain how Mars was formed, the team split the rock open and find something truly astonishing.

“Concealed in the rock is what appears to be the fossilised remains of a weird worm-like creature.”

Professor Garvie claimed the find could be the first evidence of life on Mars.

He said: “Here’s a rock that’s been sitting here unstudied for nearly a decade, and suddenly people realise there’s something really unusual about this stone.

“This is the first credible evidence of possible life from space, we’ve been speculating about this for years, but here we actually have something from another planet that has life in it.”

But, the rock took a lot of criticism from others in the science community, who claimed it could have been laying on Antarctica for millions of years, where the creature may have made it inside.

Fellow meteor expert Dr Alan Treiman said there was an easy way to settle the score.

He said: “There’s a way to test this, it’s possible now to take a slice of the rock out and look at the bug in cross-section.

“That’s never been done and it’s always been a problem for me.

“There’s a way to test this idea, but it’s never been done, I don’t know why.”

In April 2020, researchers reported discovering nitrogen-bearing organics in Allan Hills 84001, but no further analysis of the fossil has been completed.