First, she renovated the Rose Garden. Then, Melania spruced up her husband. 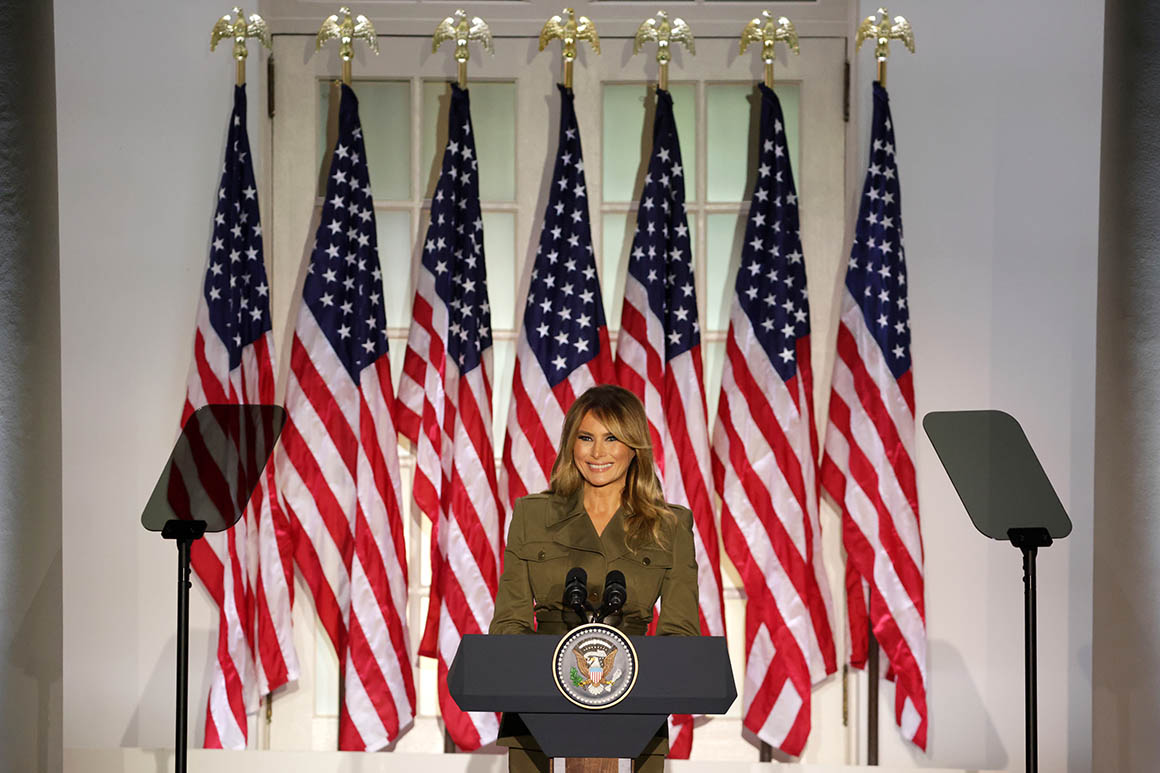 Early in the evening, the cameras took viewers inside the White House where Trump hosted an ex-convict (bank robbery) and the FBI agent who arrested him years earlier. Trump told the story of their unlikely friendship. The bank robber, Jon Ponder, turned to God while in prison and he later worked with his arresting officer, Richard Beasley, on reentry programs for people leaving incarceration. After they each spoke, Trump, with a reality TV show flourish, issued Ponder a full pardon.

The entire episode sought to turn several Trump liabilities around. The “LAW & ORDER” president was highlighting the power of second chances for criminals. The person who loves to attack the FBI was celebrating one of the bureau’s retired agents as a hero. And while Trump has been raging against all anti-racism protesters and hailing all police with no nuance whatsoever, on Tuesday he offered the story of Ponder and Beasley as a lesson in the power of bridging divides.

“My hope for America is that law enforcement and people in the communities across our country can come together and realize that as Americans, we have more in common than we have differences,” Ponder said.

There was a similar softening effort on immigration. On Monday, a video montage featured footage of an American couple watching proudly as sections of a border wall were erected. Trump has spent five years — ever since his June 2015 announcement speech referencing Mexican rapists — attacking undocumented immigrants. In office, he has pursued policies to sharply curtail even legal immigration to the United States. He rarely lauds the immigrant experience as important to American progress the way that most recent presidents — Republicans and Democrats alike — have. But on Tuesday, he beamed as five noncitizens raised their right hands, recited the oath of allegiance and became Americans.

“Today, America rejoices as we welcome five absolutely incredible people in to our great American family,” Trump said, in comments that sounded nothing like his Twitter feed, which he regularly uses to attack immigrants. “You are now fellow citizens of the greatest nation on the face of God’s Earth.”

Much of the rest of the evening was devoted to three big speeches from family members. Eric Trump reverted to many of the more traditional MAGA tropes of Night 1. Back in 1992, Pat Buchanan, the former Richard Nixon aide and failed presidential candidate, delivered a speech at the Republican National Convention in Houston — the “Culture War” speech — that shocked political elites for its ominous tone and attacks on Democrats as un-American. (The late lefty writer Molly Ivins famously wrote that Buchanan’s words “probably sounded better in the original German.”) Buchanan’s words seem quaint in hindsight compared with the remarks by Trump’s two male children.

Eric described the opposition as “radical Democrats” who want “to erase history and forget the past,” who “want to destroy the monuments of our forefathers,” “disrespect our flag, burn the stars and stripes that represent patriotism and the American dream” and “disrespect our national anthem by taking a knee while our armed forces lay down their lives every day to protect our freedom.” They are so un-American, “they do not want the Pledge of Allegiance in our schools.” They want to “defund the police” (Joe Biden actually doesn’t), “disrespect our law enforcement” and create “an America where your thoughts and opinions are censored when they do not align with their own.” Pretty dark stuff that casts the opposition party not as a worthy competitor with different ideas but as fundamentally alien to the American system. We are so used to this kind of political rhetoric that it barely registers as abnormal anymore.

If Eric’s speech was a detour back to default Trumpism on display Monday, Melania ended night two with a return to the sandpapering project. “My husband’s administration has worked to try and affect change when it comes to issues around race and religion in this country,” she said, referencing increases in funding to historically black colleges and his support for private school vouchers. She did not mention a long list of Trump policies, statements, and tweets — many of which surely violated the spirit of Melania’s own Be Best anti-online bullying campaign — that cut against this record.

In the attempt to recast Trump as a unifying figure of empathy and compassion with moderate policies, Melania even decried the divisiveness of American politics.

“As you have heard this evening, I do not want to use this precious time attacking the other side because as we saw last week, that kind of talk only serves to divide the country further,” she said.

Instead she offered a simple plea: “I am here because we need my husband to be our president and commander in chief for four more years. He is what is best for our country.”