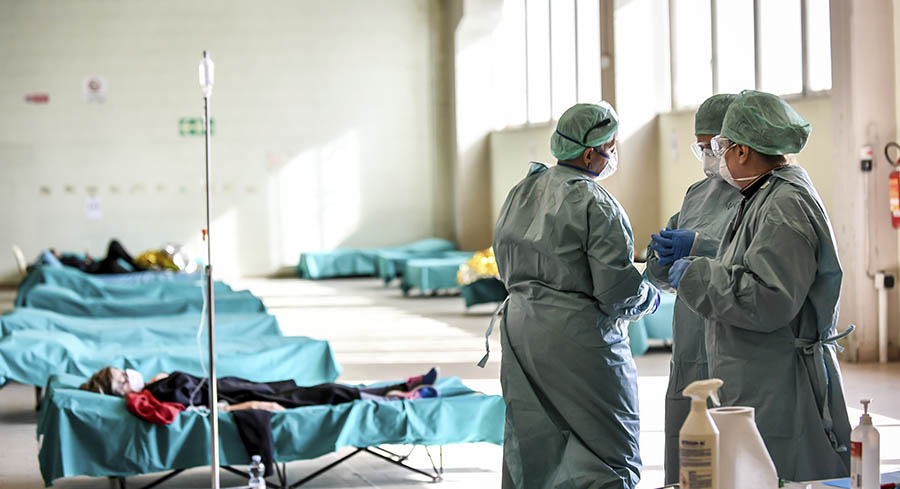 NEW YORK — The first test of how prepared New York is to kick-start its frozen economy will come in an industry that’s been pushed to the brink by the Covid-19 outbreak: Hospitals.

Gov. Andrew Cuomo is clearing the way for upstate hospitals to begin elective surgeries on Tuesday, more than a month after the procedures — often the biggest revenue source for hospitals — were canceled as the pandemic began flooding emergency rooms with severely ill patients.

The pent-up demand in New York City, for anything from knee replacements to breast cancer surgery, may lead to a migration of city residents north, carrying with them more chances to spread the coronavirus.

Some experts aren’t sure it’s worth the gamble, but caution is being pushed aside by practical need. The outcome could serve as a template for the rest of the state’s beleaguered economy.

"The opening up of business will accelerate once we start with health care,” said Mitchell Moss, an urban economist at NYU’s Rudin Center. "It’s easy to have a martini at home, but more difficult to have a root canal or knee replacement done in your living room."

Cuomo’s plan follows recommendations from the federal Centers for Medicare and Medicaid Services and a roadmap from four professional medical associations on how best to resume elective surgeries. Vice President Mike Pence this week also urged states to restart elective surgeries where possible.

Still, the stakes are high: If scores of people exposed to the coronavirus in New York City head north, they could spark an outbreak in upstate facilities that have not had nearly as much of a problem with the virus. Paradoxically, without that revenue, hospitals could face existential crises and the needs of vulnerable patients will grow.

“All of our health care resources are being applied to Covid-19, [but] there are people who have serious medical problems that need to be addressed,” said Dr. Richard Besser, president and CEO of the Robert Wood Johnson Foundation. “If there are facilities with excess capacity that can ensure people coming in are not contagious, then a couple of things will be able to happen: These facilities will earn revenue, so they can stay afloat, and people’s medical issues will be dealt with.”

For patients like Erica Vladimer, the ability to get elective surgery would mean relief from chronic, acute pain caused by endometriosis — a tissue disorder of the reproductive system that can cause excruciating pain.

Her third laparoscopic surgery to remove the endometriosis was delayed due to the coronavirus outbreak. While the surgery is not an emergency, Vladimer said she has temporarily moved in with her parents in New Jersey because she is often in too much pain to take care of herself.

“Hell yes I would find a way to drive three hours to get surgery,” Vladimer said. “If I chose to get a surgery and go up there, that’s a risk. Making that decision in a pandemic is a huge risk, and I’m willing to do that.”

She added that transferring to a facility upstate would require a referral from her surgeon to someone he trained or trusted; she would not feel comfortable seeking treatment at a random facility, sight unseen.

“It’s almost unfair for the governor to talk about something like this that he’s looking to do, knowing full well there are people who are thinking and making decisions based on emotion because they need this kind of care,” she said.

Art Fougner, president of the Medical Society of the State of New York, however, said he doesn’t see many New Yorkers engaging in “medical tourism.”

“If you’re a patient and you’re living a couple hundred miles away, your family isn’t there. You’re going to cart everybody with you? I mean, if it’s something straightforward that’s great,” he said. “Even if it’s something like a joint replacement, you have to rehab, so are you going to stay up there for rehab?”

The relaxation of restrictions is likely to be a welcome return to normalcy for the hospitals, which have seen revenue plummet under the state’s ban on elective surgery. Some have also seen costs skyrocket as emergency rooms have been overwhelmed by Covid-19 patients.

“Hospitals rely on elective procedures like knee and hip replacements to generate income and there are patients with prostate cancer who have been forced to delay surgery during the past month,” Moss said. “Just because hospitals are managed as nonprofit institutions does not mean that they do not have revenue targets.”

Risks remain, even as the number of new hospitalizations continues to fall in New York. For those who do brave the trek, some may wind up spreading the virus on their journey upstate.

“You’re driving three hours, you’re stopping at this rest stop and that stop, and you’re getting gas,” said Brian Castrucci, president and CEO of the de Beaumont Foundation. “Then you’re in the waiting room, you’re in the gift shop, you’re in the cafeteria, you’re in the restrooms.”

Hospital staff who are exposed to the virus could then bring it into their homes and communities, creating new clusters that would push back any progress made over the last month, he said.

“Those folks are going to be discharged and come back for follow-up care,” Castrucci said. “How many times do you want to roll the dice?”

Shannon Young contributed to this report.