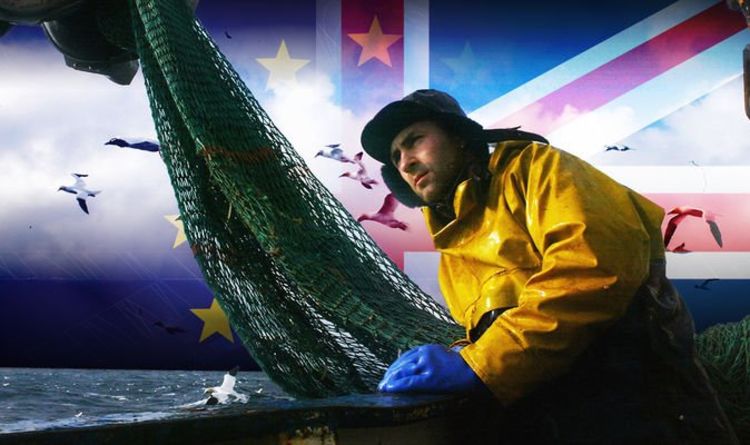 Fishing is fast-emerging as one of the biggest stumbling blocks in the upcoming post-Brexit free trade negotiations between the UK and European Union, which Boris Johnson wants to be finalised before the end of the transition period in December. Brussels is insisting on access to British waters, but the Prime Minister has stood firm and raged Britain will “take back control of our fishing”.

Campaign group Fishing For Leave has lashed out at EU fishermen for complaints from the UK over their boats fishing in British waters close to coastal areas, as well as rules around fishing quotas.

UK fishermen have been left furious after EU boats were spotted fishing off the coast in British waters, and Fishing For Leave has released images taken from the Marine Traffic website to highlight this.

Fishing For Leave’s Arron Brown described EU fishermen as being “full of anger, tears, snotters and self-pity” but claimed they have “fiddled the EU Relative Stability Quotas” to claim “grossly inflated shares” of fish.

The campaign group has raged: “Fishing For Leave were uncompromising to complaints made to them by EU fishermen, that they were merely doing what is legal, fishing close to Britain for shelter, and that the British government implemented a domestic allocation of quota that saw consolidation of quota into a few big companies hands.

“With FFL replying to them ‘We don’t give a monkey about their excuses on weather – you fish close to Britain all year whether it is wind rain or shine out there’”.

“If you don’t like bad weather why are a fleet of you off the northwest of Scotland?

“No one’s arguing successive Governments buggered domestic allocations with an FQA system that has driven consolidation to a few big companies – many of them EU Flagships.

“Justice is coming…the whole lot of you on the continent built an EU industry on the back of a rigged CFP.

“The free lunch is over and the whole lot of you will need to get having to cut your cloth and fleet to reflect what is in your own waters – just as Britain’s distant water fleet on Humberside had to do when Iceland and Norway took control of their waters post-Cod War.

“Half of you can go to the Danish scrapyards to have your boats cut up like we had to do to make way for you all. Then maybe they will know the pain and suffering we all had to go through to make way for you lot to have an industry built on our nation’s resources when all the EU has is a puddle.”

In one final brutal dig, Fishing For Leave added: “It’s tough. Welcome to re-balancing to international normality rather than the asset stripping of a nation which caused the collapse of our communities and generations of fishing heritage.”

One picture, released by Fishing For Leave from the Marine Traffic website, shows several boats located in British waters off the coast of Cornwall.

Another image shows more than a dozen being tracked off Shetland.

A third image details two Spanish fishing vessels – Akillamendi Berria and Breogan Uno – as well as the French trawler Helitrope – just west of the Cape Wrath Lighthouse, which is the most North-Westerly point on the British mainland.