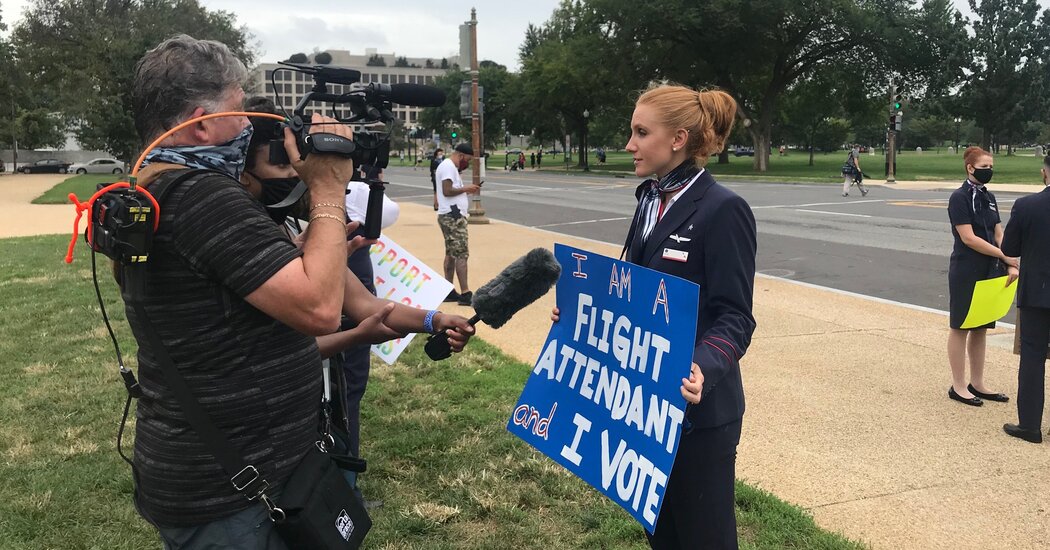 Flight attendants have taken on various roles in the public imagination over the last century: nurse, companion in the skies, doting provider, glamorous traveler.

Though commercial flights have become much cheaper and more frequent since the T.W.A. heyday, there’s still an inherent magic to air travel that rests on the cabin crew providing safety and comfort.

The job is far from a traditional 9-to-5. Perks include schedule flexibility, international travel and, in some cases, work uniforms designed by the likes of Zac Posen and Vivienne Westwood. Oh, and an office above the clouds.

“It’s hard not to appreciate the moment when the sun shines in through the airplane window,” said Allie Malis, 30, an American Airlines flight attendant. “It gives me perspective on how I want to spend my working hours and my life.”

Airlines are reporting billion-dollar losses for the year after months of curtailed travel. The International Air Transport Association predicted that air traffic this year will be 66 percent less than in 2019.

Many flight attendants have been grounded for months, but since the furloughs were announced, the number has shot up. Now they are forced to wait as the government deliberates over a stimulus package. And while the future of travel remains uncertain, some are considering giving up a career that has afforded them stability and adventure, and become a way of life.

‘We Are There for People in Their Good and Bad Times’

Earlier this year, Angel Ricumstrict-Zamora, a flight attendant who lives in Detroit with her 2-year-old daughter, bought her first home. “I bought a house for $ 75,000 less than I was approved for,” she said. “I wanted to live within my means.”

She has worked for United Airlines for 17 years. “It was my plan to do this job forever,” Ms. Ricumstrict-Zamora, 41, said. “We are there for people in their good times and bad times. We have had people find out a family member passed and they’re on the airplane. We have people going to see their first grandchild. We have little kids and adults going on their very first flight, their eyes full of wonder.”

But in recent months, she saw the social world of her profession shrink. “It was like being in ‘The Twilight Zone,’” Ms. Ricumstrict-Zamora said. “Chicago is a crazy city. In the Chicago airport there’s always activity, people running here and there. In August it was a ghost town. More than half the stores were closed. All of us — airline workers, janitors, attendants, pilots, people driving the vans — we knew this dark cloud was hanging over us.”

On Oct. 1, Ms. Ricumstrict-Zamora was furloughed. Soon after, she applied for unemployment benefits and food stamps. “I have taken half of the money out of my 401(k),” she said. A member of the Association of Flight Attendants, she has been tweeting, and calling and emailing her representatives in Congress, as well as those of her colleagues.

“Come December, I have to drain my 401(k),” Ms. Ricumstrict-Zamora said. Though she is looking for other jobs, so far nothing has come through. “I’ve already cut back. I don’t know how much more I can cut back. I’m in danger of losing my slice of the American dream.”

‘I Don’t Want to Do Anything Else’

“The last flight I worked was the end of February,” said Robert Garcia Remmert, 45, a flight attendant for United Airlines who flies out of Chicago and lives in Houston with his husband, who is also a flight attendant. “I had no idea that was going to be my last flight.”

In March, Mr. Garcia Remmert, a member of the Association of Flight Attendants, decided to take a voluntary leave of absence because he has an autoimmune disease.

Though the couple has been able to hold on to their insurance, basic living costs have stretched them thin. Now, Mr. Garcia Remmert is concerned about what will happen to his insurance in the new year; without coverage, his medication costs $ 18,000 a month.

“My doctor asked, ‘Why is your blood pressure so high?’” Mr. Garcia Remmert said. “I can only assume it’s from stress. Are we going to be able to pay our bills? Am I going to have a job?”

Mr. Garcia Remmert is the son of a preacher and used to travel around Texas and Mexico doing missionary work. He attended five elementary schools, six middle schools and four high schools. “I loved meeting other people and seeing new cultures,” he said. In 2015, he and his husband decided to make a change. “He wasn’t happy with his sales job,” Mr. Garcia Remmert said. “I wasn’t challenged at all.” At the time, he worked in accounting.

In 2016, Mr. Garcia Remmert began flying with United. “I never expected to make those big changes, especially at 40 years old,” he said. “Once I did it, I found I loved the job. I don’t want to do anything else.”

‘It Was Always the Job I Wanted’

Amy Ticknor took after her mother and grandmother when she joined American Airlines as a flight attendant in 2014. “It was always the job I wanted,” she said.

“My grandma used to fly in the times when it was super-glamorous,” Ms. Ticknor, 29, said. “She took movie actors on her planes. She had to quit because she married my grandpa, and you couldn’t be married and be a stewardess. My mom was a gate agent, and she had the same experiences. She met a ton of famous people. We always went on vacations because we would always fly for free.”

Ms. Ticknor hasn’t flown since March, when she was pregnant with her second child. Now she’s not sure when she will again. In the meantime, she’s been applying for other jobs; her husband is self-employed, so she is the main insurance provider for her family. “We just had a baby, and we have doctor’s appointments coming up for her almost monthly that we won’t be able to go to if I don’t find a full-time job that can get us health insurance,” she said.

Like many of her colleagues in the Association of Professional Flight Attendants, she has been calling and emailing her representatives every day. She even joined Twitter to speak on behalf of her profession.

A couple of years after joining American Airlines, Allie Malis decided to take on a role with an American Airlines union, the Association of Professional Flight Attendants. As a government affairs representative, she has been fighting to extend the Payroll Support Program.

“I’ve been doing this for four years,” said Ms. Malis. “We’ve had issues we’ve activated on, like minimum rest times, but this is astronomical compared to any other issue we’ve worked on. The flight attendants are more engaged than they’ve ever been before.”

But after months of watching Congress negotiate the bill, Ms. Malis said she feels that she and her co-workers are political pawns. “It’s really hard on us,” she said. “These are our lives, our livelihoods. Our families depend on us.”

Ms. Malis became a flight attendant in 2014; some of her colleagues have been in their roles for decades. “A lot of people love this job because it’s not a 9-to-5, it’s not an office job,” she said. “There are delays, exhaustion. You miss special family events. There are sacrifices. At the same time, our office view is a beautiful blue sky with white puffy clouds.”

When Ms. Malis began working for American, her father retired. During the next three years, Ms. Malis and her family took advantage of her benefits and visited 10 national parks. “We would fly to Utah or North Dakota or wherever, rent a car and go hiking,” she said. “We would stay at a cheap motel or maybe camp. We created some really incredible memories.”

Ms. Malis said she does not have a backup plan if the aid bill fails. Her immediate goal is to see the bill through and get her job back, as well as the jobs of thousands of her co-workers.

“For many of us, this job changed our lives,” Ms. Malis said. “It’s provided opportunities that we couldn’t have dreamed of. To have done everything right and worked hard at this job and to lose it is devastating.”

During the last few months, Phillip Delahunty has joined colleagues in the airline industry to rally for the extension of the Payroll Support Program in Florida, where he lives, and in Texas. In early September, he and 30 others picketed outside the office of Ted Cruz, the Texas senator.

Mr. Delahunty, 27, has flown with American Airlines for six years and belongs to the Association of Professional Flight Attendants. Seeing his colleagues joining together to fight for their jobs has made him hopeful. “There are people who are willing to organize in 2020,” he said. “We think of this generation as Netflix and Facebook, but I’ve definitely seen an organized labor resurgence.”

Mr. Delahunty followed in the footsteps of his parents, a captain and a flight attendant, when he joined American Airlines. Because he speaks French and Italian, Mr. Delahunty has regularly flown to Montreal, Milan and Paris. “The lifestyle feels natural,” he said. “It’s kind of how I grew up, just traveling constantly.”

But flying in a pandemic introduced new challenges to an already demanding job. “The mask compliance is a huge issue on airplanes,” he said. “We’re taught how to de-escalate a situation. That’s the emphasis of our training up and down, and diplomacy. Take a tense situation and make it survivable for the next couple of hours. When you have one person not wearing a mask, you have three people who are agitated around them.”

Mr. Delahunty expects to file for unemployment benefits in a couple of months and to move back in with his parents, who say this is worse than any of the crises they saw during their time in the industry.

“That’s a story you’ll hear a lot,” he said. “I’m 27. My generation hasn’t had the same financial stability that our parents did at this age. It always feels like we’re behind. That’s part of the problem here. I had a solid union job that paid well and had great benefits. Now it’s going away.”