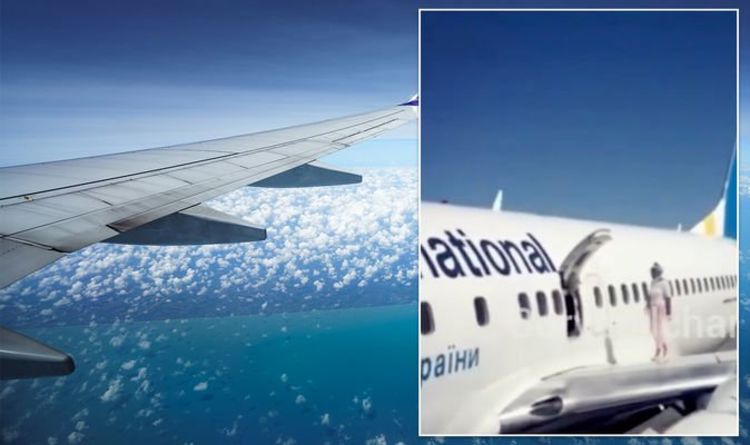 According to flight operator Ukrainian International Airlines, the wing “opened the emergency exit and went on to its wing” after landing in the city of Kiev.

The woman reportedly exited the Boeing 737-86N via the emergency exit row in a bid to “get some air”.

Another passenger on the flight told Ladbible: “The aircraft landed and almost all the passengers got off.

“She walked almost all the way from the tail to the emergency exit row, opened the door and went out

“By that time her two children were outside the plane and standing right next to me. They were surprised, saying: ‘This is our mum’.”

Already the footage has been shared around the web, sparking a variety of reactions from viewers.

Some were enraged to witness the passenger’s actions, others were simply baffled at how such a thing could take place.

“What’s wrong with people in this world, seriously?” questioned one commenter.

Another asked: “Who opened the door for her? Did she open it herself? Who just gets to stroll on the wing of a plane for some fresh air? [What] is going on?”

Others found humour in the incident, using it as an opportunity to make some light-hearted jokes.

“I mean, I’ve heard about budget seating, but that’s just a bit ridiculous,” said one.

Another added: “Taking that Wing picture to the next level.

”A third justified her actions somewhat, saying: “Hey it does get hot waiting on that tarmac runway tho…”

However, as odd as this moment may seem, some commenters had their own similar anecdotes to share.

“I absolutely hate to admit this, but a long time ago I flew to Cozumel via Mexico City from the US,” wrote an Instagram user.

“During the stopover, they wheeled the stairs up and a few of us ‘stepped outside and smoked’.

“Of course, now I understand the danger, especially with jet fuel. But at the time, aviation safety, especially in places like Mexico, wasn’t high on the radar screen.

“What’s even funnier is that I ended up in a career which landed me (sorry for the pun) in a job selling flight simulation and modelling for Military and Commercial Aircraft.

“I even have a Clearance. So I guess if we live we learn.”