Florida's Rising COVID-19 Numbers: What Do They Mean? 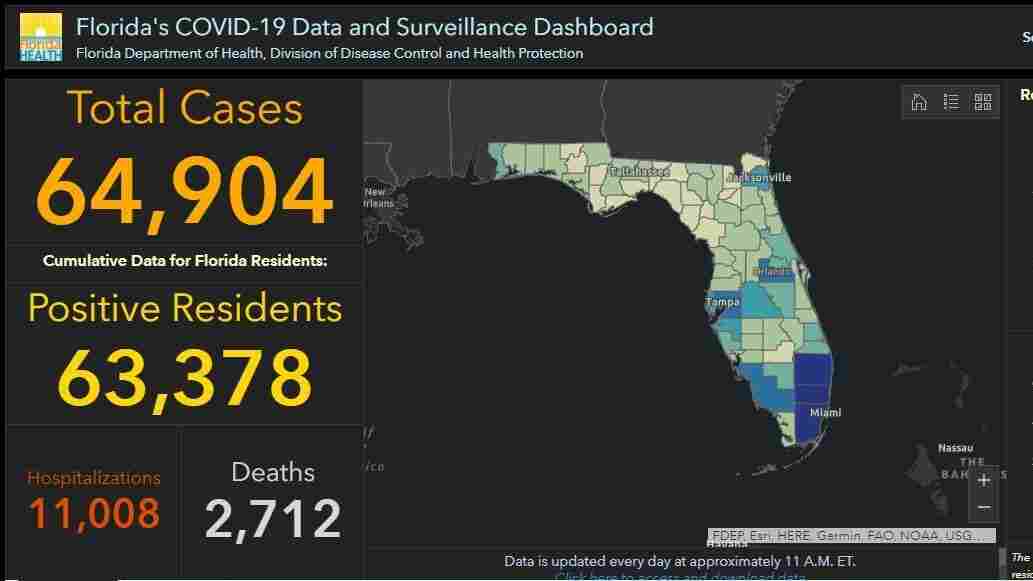 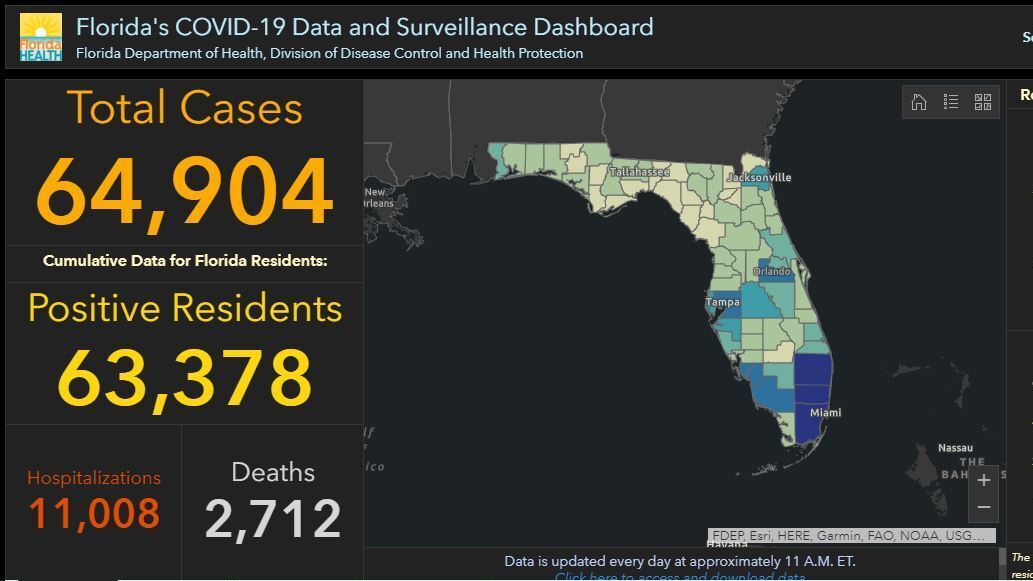 Florida’s COVID-19 dashboard, here in a snapshot Monday, shows an uptick of cases.

Over the last week, Florida has seen rising numbers of new COVID-19 cases. Since Tuesday, the number of people who tested positive for the coronavirus totaled more than 1,000 each day. Saturday’s total of 1,426 positive tests was the most since early April.

A similar rise in new cases is happening in other states, including North Carolina, Texas and California. It’s leading to worries that as businesses reopen and stay-at-home orders are lifted, relaxed guidelines could lead to new outbreaks and even a second wave of infections.

In Florida, Gov. Ron DeSantis downplayed concerns that the rising numbers are related to the state’s reopening. He believes more people are turning up positive for COVID-19 because more people are being tested. “We’ve now, in the last two weeks averaged 30,000 test results a day in the state of Florida. If you go back to the…beginning of April, we weren’t even doing 10,000 test results a day.”

DeSantis pointed to the state’s low rate of positive tests. In Miami-Dade County, the area in Florida hardest hit by the pandemic, the positive rate is around 5% now, much lower than it was in April, when it was over 10%. With widespread testing now available for anyone who wants one, DeSantis said many people without symptoms are being found positive for the coronavirus. “These are people, a lot of them don’t even think they’re necessarily sick, but (testing) is there so they go. And granted, 98% of them are negative, but you do find cases.”

Mary Jo Trepka, a professor of epidemiology at Florida International University, agrees that increased testing is a major factor in the rising numbers. “It’s easier to get testing now. Before, the people very, very sick in the hospital were being tested, but not necessarily people who were more mildly ill.” Also she said, more positive cases are being identified through contact tracing. “And so you’re more likely to pick up those people who are asymptomatic or mildly symptomatic.”

One area of concern, DeSantis said, are agriculture communities in South Florida where workers live in close quarters. “They’ve been going and aggressively testing all those areas,” DeSantis said. Prisons are another area where outbreaks are being monitored and contained.

Trepka said, at least in Miami-Dade she is seeing an impact from the opening of businesses and a relaxing of social distancing guidelines. The rate of positive cases among those tested for the coronavirus, which was steadily declining, has now leveled off. Trepka says, “It looks like some of the gains that we were making when we were completely closed down, we’re no longer seeing those gains in terms of a decrease in positivity rates.”