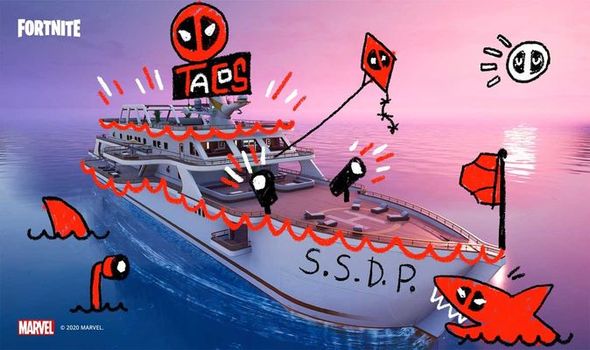 THE new Fortnite Event is launching this week and will introduce one of the most hotly anticipated skins to the game on all platforms. So what time is everything kicking off and are fans getting a new trailer or live portion to watch?

UPDATE: The Fortnite Deadpool event has kicked off following the launch of the new map takeover and skin challenges on PS4, Xbox One, Switch, Mobile and PC today.

There are reports of the new Deadpool Challenges not working for some gamers and Epic Games has confirmed they are looking into the issues. The Fortnite Deadpool event time was scheduled for 3pm BST, April 3, but did not include a large live server event.

ORIGINAL: Fortnite Chapter 2 Season 1 was a bit of a boring affair that went on too long for many gamers on PS4, Xbox One and PC. But with the finale of Chapter 2 Season 2 scheduled for the end of April, it looks like Epic Games could have a few events planned before the start of Season 3. And while a big Fortnite event is happening this week, fans may have to wait longer for a live server experience.

The next Fortnite event we know about will involve Deadpool, and Epic Games has confirmed it will be kicking off today, launching one of the most hotly anticipated skins in the history of the game, among other things.

The downside is that not everyone will be able to unlock the new design when it does go live.

For those who might have missed it, the upcoming Deadpool outfit is the secret skin for the latest Fortnite Battle Pass, with the outfit unlocking after themed challenges are completed.

If you do have the latest Battle Pass, you’ll have a good chance of unlocking the new Deadpool skin during today’s event.

WHAT TIME IS THE FORTNITE DEADPOOL EVENT?

As mentioned above, the Fortnite Deadpool event is kicking off today, and is part of the Week 7 Challenges rollout.

It’s expected that the Fortnite Deadpool skin will unlock when the Week 7 challenges become available at 3pm BST (7am PT) on Friday, April 3 2020.

A message was shared from the official Deadpool Twitter account earlier this week, confirming that things would be kicking off today.

The message reads: “Starting tomorrow, I’M crashing this party. There’ll be music, tacos, and a whole lotta Deadpool. Trust me, you don’t want to miss this.”

So if you’ve been completing the Fortnite Deadpool challenges every week, you’ll just need to complete one week 7 task to get the skin.

Leaks have indicated that when Deadpool launches in Fortnite the Merc with a Mouth will announce his arrival by taking over the Yacht.

Leaks have also revealed that the Battle Bus will be getting a Deadpool makeover as will supply drops which will feature Deadpool’s face on the balloon.

So there’s plenty of stuff going on this week in Fortnite Battle Royale and more is being planned before the end of Season 2.

While we know that the Fortnite Deadpool skin will be launching this week, that won’t be the end of the event.

Epic Games will be giving fans the chance to unlock a new variant for the upcoming Fortnite Deadpool skin.

This will likely be the Unmasked Deadpool skin that was leaked earlier this month by dataminers.

This is expected to arrive next week, around Thursday, April 9, on all platforms.

Things should kick off during Week 8 with the launch of the next Fortnite Deadpool challenges, much like we will see later today..

Completing one of the upcoming Fortnite Deadpool week 8 challenges will give players a new skin style which shows Deadpool unmasked.

And with Fortnite Chapter 2 Season 2 not scheduled to end until the end of April, there’s plenty of time for new events and map updates to take place.

Fans will certainly want to keep an eye on key locations around the Fortnite map over the coming days and months.

There are also rumours that a new Doomsday event will offer a big bang before Season 3 starts.

This could be the next live event coming to game as this week’s Deadpool launch isn’t expected to have that kind of component.

So far, data miners have found a Doomsday Hatch, device and Door, which could all add up to something special being planned by Epic Games.