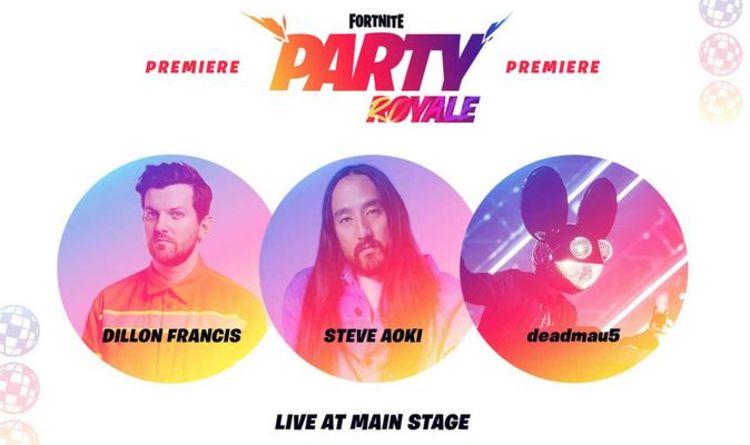 Fans ready to explore the new Fortnite Party Royale mode more will get their wish this week as Epic Games has announced a new event schedule. For those who might have missed its announcement, the new Fortnite Party Royale mode is a way to enjoy the game without having to battle other gamers. It makes for a space where events can be held and Epic Games has been building a lot of hype around its music shows.

One of the first was held by DJ Marshmello but the Travis Scott concert that launched earlier this year was a huge step up when it came to visual effects.

Now, Epic Games has announced its plans for the Fortnite Party Royale Premiere, featuring a number of different artists.

WHEN IS THE FORTNITE PARTY ROYALE EVENT TIME?

Epic Games has announced that the Fortnite Party Royale Premiere is being held on Friday, May 8, 2020.

The schedule also confirms that the Fortnite Party Royale event time has been set for 9pm ET, in the United States.

This means that for gamers in the UK, the new Fortnite Party Royale event will be kicking off on May 9, at around 2am, GMT.

Epic Games is also making it possible for gamers to jump into the event between 9pm and 10pm ET.

As long as you manage to join the Fortnite Battle Royale before 10pm ET, you shouldn’t miss anything.

Epic Games will also be rebroadcasting the event on May 9 from 2 PM to 3 PM ET, making it possible for you to catch the full show once again at the Main Stage.

This will be a little easier for gamers in the UK, as the Fortnite Party Royale rebroadcast will start at around 7pm, GMT.

When it comes to entertainment, we know that Dillon Francis, Steve Aoki, and deadmau5 are coming to Party Royale with back-to-back-to-back sets LIVE on the big screen at the Main Stage.

A message from Epic Games adds: “Hit the dance floor, chill with friends, or jump into activities in Party Royale.

“Shows at the Main Stage are just some of the many attractions at Party Royale. In this new experimental and evolving space, there are many things to do and places to explore.

“For example: take on aerial obstacle courses at Skydive Rift, participate in boat races at Fishsticks’ Boat Race, and grab items at The Plaza such as the new Paint Launcher.

There are no weapons or mats in Party Royale — it’s all about just hanging out and having fun. No Sweat. All Chill. Let’s Party!

“To join the party, select the “Party Royale” playlist in Battle Royale. If you’re new to Fortnite, you can download Fortnite for free.”