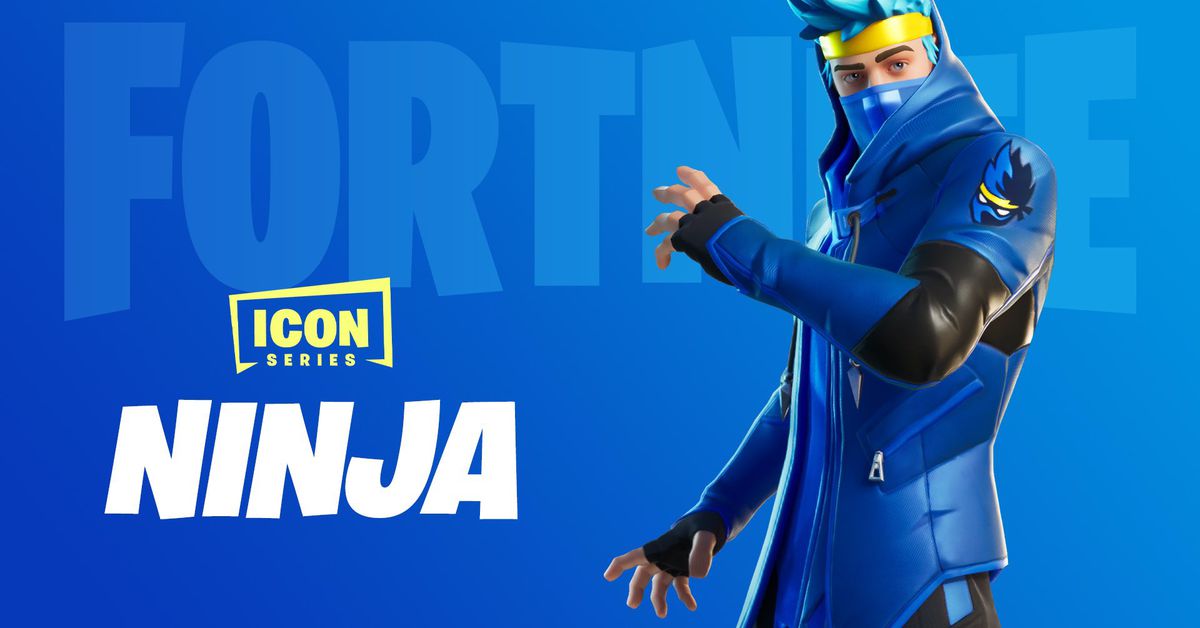 Fortnite may no longer be the most buzzed-about video game in the world. But developer Epic Games this week announced a new, rather ingenious, strategy to help its battle royale hit remain relevant. The company is calling this new idea the Icon Series, a collection of virtual costumes (or skins, in gaming parlance) that go beyond borrowing characters in popular media properties and instead use real-life people.

For the launch of the Icon Series, Epic turned to Tyler “Ninja” Blevins, the star streamer who’s long been the face of the game and one of the biggest and most recognizable gaming celebrities out there. The Ninja skin, debuting later today in the Fortnite store, is a high-quality virtual representation of Blevins’ imagined avatar, equipped with sleek black-and-blue ninja garb and the streamer’s signature blue hair and yellow headband.

Think of it like The Matrix version of Blevins, but one anyone can play as in a video game if they plunk down the money to adopt his new signature outfit. And similar to that fictional virtual reality, Fortnite’s Icon Series is just the latest step in Epic’s quest to build its own immersive virtual world, one that inches ever closer to the coveted Metaverse for which gaming and social media giants keep striving.

It’s no wonder the streamer hyped up the announcement for days on end, or that he was so ecstatic to announce it to his fan base live on Mixer Wednesday morning. It’s a legitimately cool thing to see yourself in a video game, one that, in Blevins’ case, you play almost every single day and on which you built an entire career.

On top of that, Blevins likely hammered out some type of deal with Epic that would see him benefit financially from sales of the skin. It’s a win-win and a first for the streamer community, considering Fortnite’s only other real-world skins have been either the likeness of actors playing fictional characters or popular musicians like Marshmello and Major Lazer.

The Icon Series is another step toward creating the Metaverse

How this affects Fortnite’s ongoing longevity is yet to be seen. But it’s a very smart move from Epic to turn its high-profile streamer base into a new line of in-game items for purchase. The Icon Series is already slated to get two other streamers, Loserfruit and TheGrefg, and Epic is planning more in the line from across the “games, music, and entertainment” industries.

Each one will likely include a big announcement from the individual personality, as well as headlines and interest from players regarding when they’ll be available and how much they’ll cost. It’s the ultimate virtual product drop, with a built-in limited time appeal as the skins will eventually go away, and it stands to make Epic and its partners some serious cash.

Fortnite’s biggest draw these days is that it’s the closest equivalent we have right now to the long sought-after Metaverse — a kind of Ready Player One-style virtual world that can house all forms of pop culture in a shared universe populated by hundreds of millions of people. When something momentous happens in the world of film or sports, like the NFL Playoffs or a new Star Wars movie coming out, Fortnite is there to help market it. That could mean selling NFL jersey skins, a virtual Kylo Ren costume, or, in the case of The Rise of Skywalker, even debuting an exclusive clip of the movie before its release.

“The more that we’re trying to experiment with stuff and try different things, we’re finding more and more that our goal is to create a Metaverse,” Fortnite creative director Donald Mustard said, referencing the iconic concept of an all-encompassing virtual world from Neal Stephenson’s Snow Crash, last month in an acceptance speech at The Game Awards. “To create a place where all [intellectual property] can live together, where all kinds of experiences can happen, where we can create a thing that is totally new — a totally new emergent type of media, really.”

Mustard makes a good point. The appeal of Fortnite is no longer in the fact that it is a polished battle royale game, or that it has fun building mechanics and cool, goofy weapons and vehicles you can use. Few people, outside of the diehard fans and the competitive streamers, are playing Fortnite these days to compete and win. Instead, most players are keeping tabs on Fortnite as if it were a unique place you travel to, completing challenges to unlock new cosmetics, and checking in on the ever-evolving world you inhabit when you play the game in the event something exciting is happening, like a new Star Wars trailer debut.

The Icon Series, in this context, benefits Fortnite in a number of ways. It gives streamers a reason to keep playing and promoting the game, hoping they, too, can get their own skin. It also elevates the idea that the most dedicated content creators will be rewarded by becoming part of the fabric of the game itself. No other game on the market right now has crafted such a tantalizing appeal around being included in its virtual world, and that’s a testament to how methodically and artfully Epic has pulled off these brand deals with Disney, Marvel, musicians, and other big entities in pop culture.

‘Fortnite’ is more a virtual world than a BR game, making the outfits you wear more important than ever

The Icon Series may be starting small, with names who are best known to the world of gaming and, in Blevins’ case, somewhat peripherally in broader pop culture spheres. But there’s no limit to the scope of celebrity or the variety of industry that could be incorporated in the future. The Disney and NFL deals have proved that Epic knows what it’s doing with regards to handling extremely sensitive and high-profile brands and trademarks.

That’s precisely what has made Fortnite so successful. Just when you think the game may have exhausted all possibilities or hit the end of the road, Epic figures out a way to broaden the horizons and in a way that makes everyone involved a whole lot of money. So while it may not exactly be a corporate and sponsor-free Metaverse, it is certainly the most realized virtual world we have right now.