Four reasons to try to get a better night’s sleep 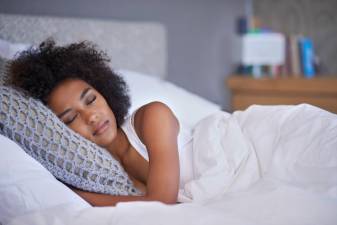 FRIDAY, March 13 marks World Sleep Day, which aims to highlight the importance of sleep and help us get more of it.

Sleep is now known to be an essential part of good health, and yet an increasing number of us don’t get enough good quality shut-eye.

With this in mind we round up four studies which emphasize how sleep could boost our health and well-being and what might motivate us to get more of it.

It could improve your gut health

As well as the recent focus on the importance of sleep for our health, there has also been a lot of research looking into how our gut can affect our well-being.

The findings from a study published last year in the journal PLoS ONE showed that in fact, a bad night’s sleep has a negative effect on gut health, which in turn could lead to other health issues.

Although the study was a preliminary one and looked at just 26 male participants, the researchers found increased sleep efficiency, which is the percentage of time spent asleep in bed, and total sleep time were positively associated with a more diverse gut microbiome, which is also known to be a “better” gut microbiome.

The more diverse someone’s gut microbiome is, the likelier they are to have better overall health.

It could boost mental health

Research has also shown that getting enough shut-eye could have a positive effect on our mental health, including the mental health of children and teens.

A recent study published earlier this year found that after following 799 children from the age of six to 12, those who got the least sleep had the greatest risk of developing mental health issues.

Another study, published last year, which looked at 110,496 college students also found that insufficient sleep was associated with a variety of mental health problems and symptoms including depression, feelings of hopelessness and anger, and anxiety.

It can protect your heart

More and more studies are now looking how sleep can affect our heart health.

One study that looked at 1,992 men and women aged 45 to 84 years old over a five-year period found that participants who got a different amount of sleep each night or who had no regular bedtime and wake-up times had more than double the risk of experiencing a cardiovascular event compared to those with the most regular sleep patterns.

It could boost your performance

Sleep, or a lack of it, could be affecting the academic performance of kids in school, and our own performance at work according to recent research.

A US study which looked at the effect of 24 hours of sleep deprivation on 234 adult participants also found that a lack of sleep can decrease our ability to complete tasks, leading to mistakes at work that can range from basic errors to possibly even dangerous mistakes. – AFP